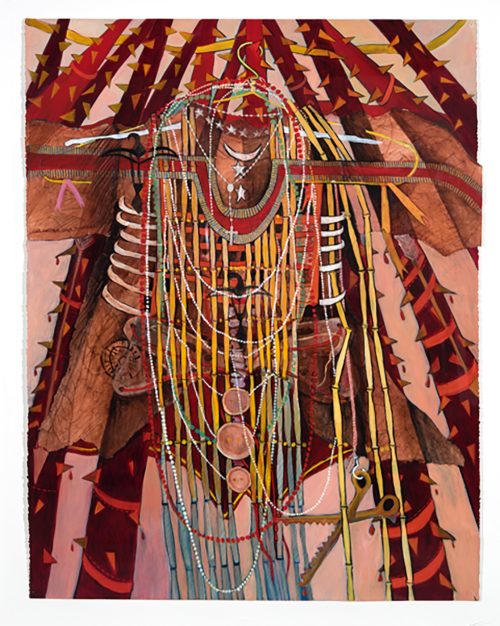 NICKLE GALLERIES, CALGARY, AB – To December 16, 2017
By Robin Laurence
Artist, activist, poet, and curator, Joane Cardinal-Schubert was a pioneer of art that articulates Indigenous histories and identities. In the late 1960s and early 1970s, while still a student, first at the Alberta College of Art and then at the University of Calgary, she began researching her family and cultural background, drawing imagery for her deeply felt and richly hued paintings from archival photographs and museum collections. Early on, she portrayed historical First Nations and Métis figures such as Big Bear, Poundmaker, Crowfoot and Louis Riel. Later, after visiting Writing-on-Stone Provincial Park and other petroglyph and pictograph sites, she incorporated silhouetted images of horses, buffalo, wolves and bears into her art. To her visual vocabulary she added sweat lodges, war shirts, medicine wheels, and other culturally and spiritually charged objects that spoke to her Kainai heritage and her strongly held beliefs. With her 1989 installation The Lesson, Cardinal-Schubert was one of the first artists to address the terrible legacy of residential schools.
“People say my work is political,” Cardinal-Schubert once told Windspeaker correspondent Gina Teel. “But to me, a work of art is about life.” That life is commemorated in The Writing on the Wall, a major retrospective exhibition at the Nickle Galleries, and in the accompanying book edited by curator Lindsey V. Sharman and published by the University of Calgary Press. Through paintings, drawings, prints, collages, ceramics and installations created over four decades, the artist’s commitment to the past, present and future of Indigenous peoples is powerfully expressed. Cardinal-Schubert died in 2009 at the age of 67.