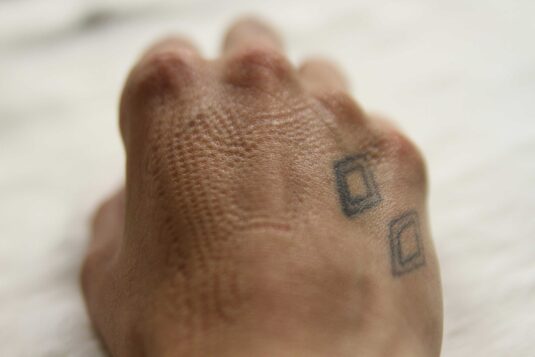 Southern Alberta Art Gallery, Lethbridge, AB – To November 26, 2017
By Michael Turner
Jeneen Frei Njootli is a Vuntut Gwitchin artist who works in a variety of media and “has been living as an uninvited guest in the unceded, ancestral land of the Musqueam, Squamish, Tsleil-Waututh and Stó:lo peoples for around a decade.” While earlier works range from wind-blown kinetic sculptures to musical instruments made with animal parts, the body—like the land with which that body is entwined—remains a guiding force in her practice.
In her current exhibition, Frei Njootli once again presents work in a variety of media (from printed images and video to objects and performance), only this time the unifying element is drawn from the artist’s personal collection of beadwork, all of it given to her by friends and family members.
The emphasis here is not on the beaded objects themselves, but on the impressions these objects leave on the body. For Frei Njootli, these impressions are more than neutral aesthetic techniques. As much as they remind us of “community, love and care,”they also signify “something darker, something gruesome.” Thankfully—and sometimes regretfully—these impressions are fleeting, leaving behind only mediated forms of remembrance similar to those carried by images, video, objects and performance.
saag.ca