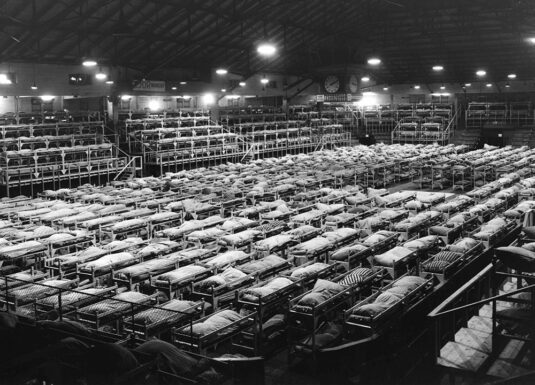 Nikkei National Museum, Burnaby, BC – To January 14, 2018
By Michael Turner
The 1942 incarceration of 8,000 Japanese-Canadians at Vancouver’s Hastings Park and their subsequent relocation to rural internment sites and work camps along with 13,000 others is among the lowlights of a country whose national anthem equates strength with freedom. Fortunately for future generations, the incarceration is well documented, from Joy Kogawa’s 1981 novel Obasan to numerous testimonials and photographs, some of which feature in this inventive exhibition.
Produced in collaboration with performance artist Yoshié Bancroft, Hastings Park 1942 is built around an interactive theatrical installation entitled Japanese Problem (2017)–a term coined by Canadian politicians during World War II that, in its racialized nomenclature, failed to recognize Canadian citizens of Japanese ancestry as Canadians, casting them as enemies of the state or, more paternalistically, as in need of protection from what was believed to be a uniformly racist non-Japanese public.
Japanese Problem is set in the present and in the days following Imperial Japan’s attack on Hawaii’s Pearl Harbor. Gallery patrons are invited to visit a stall in which internees have fashioned a provisional home. Billed as a “place of wonder,” the stall also functions as a place of uncertainty, where residents share their concerns about where they are headed and, when speaking in the present, whether or not they want to be memorialized.
centre.nikkeiplace.org