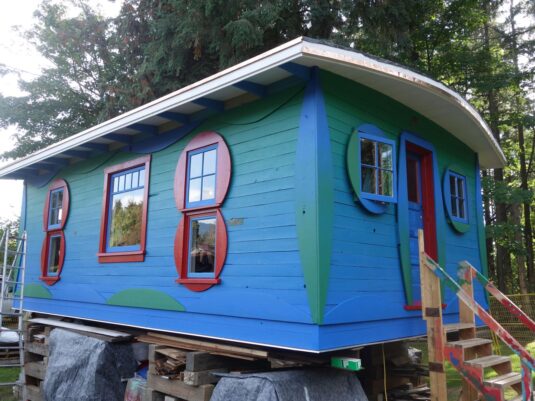 Grunt Gallery, Vancouver, BC
By Michael Turner
The North Vancouver foreshore has a long and storied history. While much of this history informs the present-day life of the Tsleil-Waututh and Squamish First Nations people, more recent histories include authors Malcolm and Margerie Lowry’s wartime Dollarton shack, the Maplewood Mudflats countercultural squat of the 1960s and, until 2015, artists Al Neil and Carole Itter’s Blue Cabin at the edge of the former McKenzie Barge shipyard near Cates Park.
When news broke that McKenzie Barge had been sold to a private developer, many were concerned that the Blue Cabin, like the Lowrys’ shack and the Maplewood squat, would be burned or bulldozed. In recognition of the cabin’s cultural importance (Neil first moved there in 1966), a group was formed to remove the cabin, restore it and make it available to artists who could not otherwise afford to live in a region where rents have gone through the proverbial roof.
“Artist residencies exist worldwide and the experiences of those who have been lucky enough to take part are often described as life changing and transformational,” writes Grunt Gallery director Glenn Alteen, who led the campaign. “Recognizing the need for such a generative space, the Blue Cabin Floating Artist Residency presents an opportunity that is unique to this region while global in its reach.”
grunt.ca/the-blue-cabin