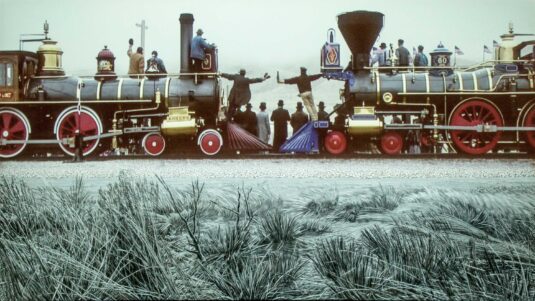 Zhi LIN: In Search of the Lost History of Chinese Migrants and the Transcontinental Railroads

TACOMA ART MUSEUM, TACOMA, WA – To February 18, 2018
PROGRAPHICA/KDR, SEATTLE, WA – January 4-27, 2018
By Matthew Kangas
In works filling both a museum and gallery, Chinese-born artist Zhi Lin, an endowed painting professor at University of Washington, Seattle, resurrects tales and scenes of the poor treatment of Chinese immigrants who built the transcontinental railroad in California, Nevada, Utah and Wyoming between 1863 and 1869. Sensitive grisaille watercolors join pictures of landscape scenes where the living settlements were constructed and where acts of vigilante cruelty and violence occurred, eventually leading to the Chinese Exclusion Act of 1882, only repealed in 1943.  Lin’s exquisite realist technique supersedes photographic documentation, rendering the mountain and forest vistas-where the atrocities took place–appealing yet ominous in their myriad gray tones. Having studied at Britain’s most conservative art school, the Slade School of Fine Art at University College, London, Lin also worked at University of Delaware after his undergraduate studies in Hangzhou. Grants from the National Endowment for the Arts, Creative Capital Foundation, and the Wallace Foundation Giverny Residency underwrote his artistic research on this topic. Not surprisingly, Lin compares his theme to the “current anti-immigrant environment.”
tacomaartmuseum.org