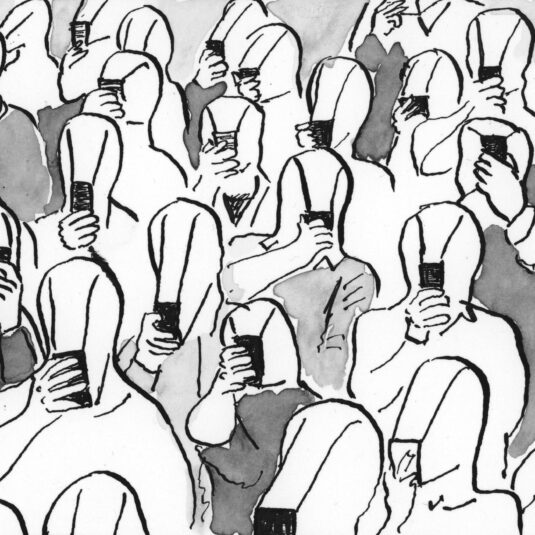 hfa contemporary, Vancouver, BC – November 16 - December 15, 2017
By Michael Turner
Among 2016’s publishing surprises was an independently produced 160-page book of pen, ink and wash cartoons accompanied by celebrity quotes, opinions, ideas and facts concerning what many health-care professionals call our “disturbing” relationship to our phones. Entitled Dysconnected: Isolated by Our Mobile Devices, the book was written and illustrated by South African–born Anton Scamvougeras, a clinical associate professor of neuropsychiatry at UBC—when he’s not drawing and painting in his studio.
“The actual moment of inspiration for the central Dysconnected image came to me completely non-verbally, while I was sketching,” Scamvougeras told the Vancouver Sun’s Stuart Derdeyn in a December 2016 interview. “A picture emerged of a person ‘boxed-in’ and isolated by their cellphone use.”
Indeed, what at first glance looks like a drawing of a member of a parallel humanoid species known for its defeatured, snout-heavy head is in fact a picture of ourselves caught in the communion between the phone’s light-casting face and the human face “illuminated” by it. What Scamvougeras has done is render that space monochromatically, in white.
The first public exhibition of the 64 Dysconnected drawings has occasioned a detailed statement from Scamvougeras, in which he reveals that the project began in 2015 while “working on a series of monochromes dealing with Canadian identity.” After that he made a drawing a day and posted them online. “The daily rhythm and daily commitment of the blog gave the series momentum—the series may not exist without the very technology that it is critically examining.”
hodnettfineart.com