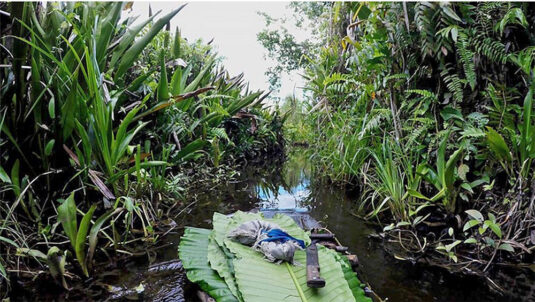 Libby Leshgold Gallery, Vancouver, BC – To January 14, 2018
By Michael Turner
Emily Carr University of Art + Design’s recent move from Granville Island to the newly branded False Creek Flats is one of a number of changes that have seen ECUAD shift from a school (1925 to 1977) to an institute (1978 to 2007) to a university (2008 and ongoing). Another shift concerns the naming of its art gallery. What was until last year the Charles H. Scott (after the school’s former principal) is now the Libby Leshgold (after the late designer whom ECUAD president Ron Burnett has described as a “creative wellspring”).
For its inaugural exhibition, curator Cate Rimmer has mounted a group show that “extends” the many-chaptered The Voyage, or Three Years at Sea research project she began six years ago. Entitled The Pacific, the current exhibition features a range of artists from as far afield as the Philippines (Isabel and Alfredo Aquilizan), Samoa (PaulaSchaafhausen), Tonga/New Zealand (Kalisolaite ‘Uhila), as well as locals Michael Drebert, Evan Lee and the late Beau Dick.
“The exhibition considers the Pacific Ocean as a shared and connected space,” writes Rimmer. “It explores the idea that although the Pacific is an immense body of water, there is a strong sense that it is a space of connection between peoples that live beside or are surrounded by it-that it brings people together rather than separates them.”
libby.ecuad.ca