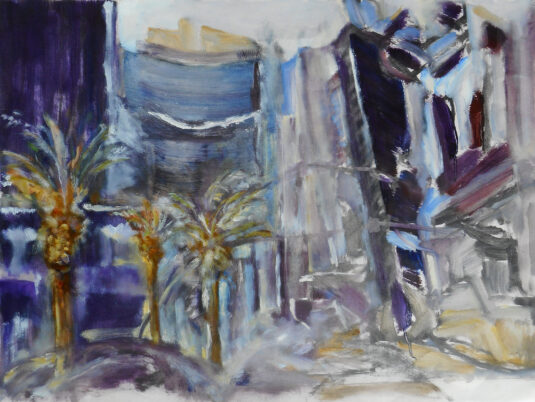 Xchanges Gallery and Studios, Victoria, BC

Xchanges Gallery, Victoria, BC – January 5-21, 2018
By Christine Clark
Painted in 2017 before the mass shooting of October 1, The Vegas Project, nevertheless, presents a series of disturbing oil and mixed media paintings. These are vivid, gestural portraits of the Las Vegas Strip described by the artist in an adrenalin-laced language almost akin to a list of PTSD symptoms. Mary Babineau write about her constant edginess, an unease, an awareness of her peripheral vision, and her visceral response to the urban environment.
Based on photographs taken during a vacation, the paintings include Holzer Drop-off, which looks like an Alberto Giacometti piece if he’d decided to draw the interior of a casino. Featuring gauzy red paint with spectral traces of light moving through it and a grill of light like some inhuman mouthful of teeth, this is not your typical desert-escapist image. Even Strip, which includes palm trees, is deeply chaotic, almost underwater, with the architecture seemingly about to tear itself away from its foundations for purposes unknown, but certainly nefarious.
These are compelling paintings. Babineau writes that in her original statement andearly studies for finished paintings, a “ ‘catastrophe or post-disaster state’…was strongly evident, however, I subdued it because at the time it was not the intention I sought, but deep trouble brewing has bubbled up to the surface.”
Opening: Jan 5, 7-9pm