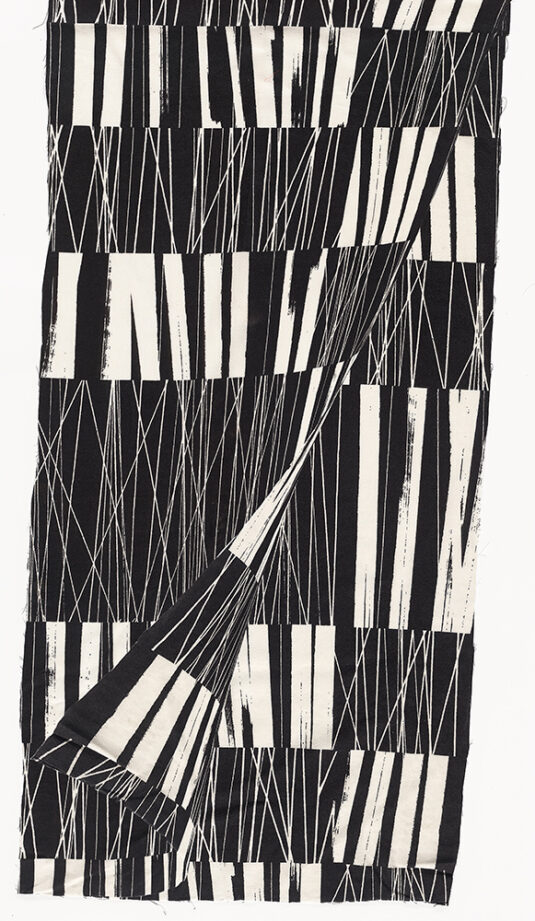 Contemporary Art Gallery, Vancouver, BC – To March 25, 2018
By Michael Turner
Ask a search engine for the definition of “full frontal” and top responses will refer to human nudity, while secondary options are more generalized. (For example, “with nothing concealed or held back.”) Lyse Lemieux’s current exhibition—at the CAG’s gallery façade and Yaletown-Roundhouse SkyTrain Station—is aware of this variance, if not in content, then in form.
Lemieux’s work has long straddled what was once considered art’s hard black line between figuration and abstraction. At the CAG, this line is now registered in a large-scale black ellipsis that the artist has placed over the gallery’s exterior, “both revealing and concealing the architecture on which they’re placed.” In contrast, the exterior treatment of the neighbouring SkyTrain station is less a gesture toward enclosure than an unintended opening, similar to those made available through a missing blouse button on a turning torso.
The body and its relationship to public and private space is a running theme in
Lemieux’s work. More often than not, this theme is expressed through clothing and its material composition. A recurring motif is derived from the black tunic Lemieux wore as a child to her Catholic school. Another is the pleated skirt and its Irigarayan folds.
FULL FRONTAL marks a turning point for an artist who, after spending much of the 1990s working as a Radio-Canada producer and journalist, has returned to the exhibition circuit full force.
contemporaryartgallery.ca