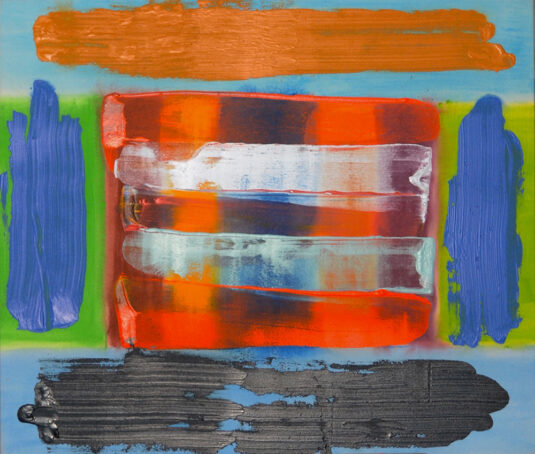 Bugera Matheson Gallery, Edmonton, AB – November 17-December 7, 2017
By Michael Turner
Over the course of her remarkable career, Quebec-born Michèle Drouin has distinguished herself as both a poet and a painter. Her lines, whether published in books or brushed onto canvas, share a lyricism that transcends their respective mediums, an effect that suggests a further transcendence—from artist to oracle.
Like many Quebec artists of her generation, Drouin was attracted first to figuration. Yet even her earliest drawings and paintings provide evidence of an artist attentive to prevailing regional trends, most notably Surrealism, as manifested in the work of the Automatiste artists of the 1950s. But it wasn’t until the early 1970s that Drouin’s interest in abstraction took root in a Hard-Edge painting tendency that, despite the style’s emphasis on clearly demarcated geometric shapes, allowed her to experiment with contrasting forms, an approach that laid the groundwork for her signature expressive stroke.
Although Drouin stopped painting in 2011 (at the age of 78), her final decade of production is indicative of an artist who, like Helen Frankenthaler or Raoul De Keyser, has an almost mystical understanding of colour and its myriad interactions, but also its relationship to those equally important modernist criteria of line and form.
bugeramathesongallery.com