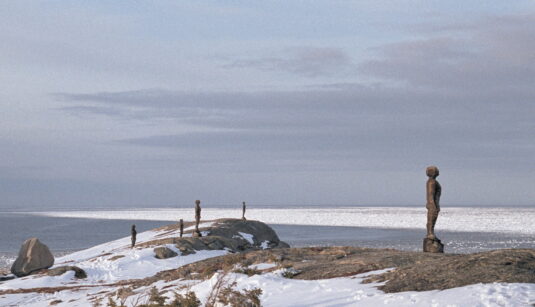 Songs for Pythagoras
ART GALLERY OF ALBERTA, EDMONTON AB - To May 16, 2018
Carbon Capture
PETER ROBERTSON GALLERY, EDMONTON AB - To February 28, 2018
By Michael Turner
Among the many visual art genres to emerge in the 1960s, Land Art is arguably the most enduring, and still relevant today. Iconic works include Robert Smithson’s Spiral Jetty (1970), Nancy Holt’s Sun Tunnels (1973-1976) and Christo and Jeanne-Claude’s Surrounded Islands (1983); more recent practitioners include the Feminist Land Art Retreat and Tania Willard’s Neskonlith-based BUSH Gallery.
In 1995, in Demmitt AB, Peter von Tiesenhausen received international attention when, in an effort to keep an oil company off his property, he had his farm designated an artwork.
Although the land remains a site of material resistance and critical regeneration in his process-based practice, von Tiesenhausen has distinguished himself in numerous media over the 28 years he has been working as a full-time artist. Yet whether it is painting, sculpture, video, performance or community engagement, von Tiesenhausen’s approach remains consistent. According to Art Gallery of Alberta curator Catherine Crowston, “...his methodology is characterized by an intense pursuit of ecological
sustainability, an attempt to understand time and substance.”
In Songs for Pythagoras, von Tiesenhausen has reimagined the Art Gallery of Alberta’s spacious third-floor gallery into a visual and sonic sensorium, a stunning architectural intervention that, while recalling (ironically) those first-wave land artists who fled an unyielding object-oriented gallery for greener pastures, will remind some viewers of what those pastures inspire. For those equally disposed to objects, Peter Robertson Gallery has on display a number of von Tiesenhausen’s smaller elemental (sun, rain and fire inflected) wall works. Given the concurrence of these exhibitions, expect to make some connections.
probertsongallery.com
youraga.ca