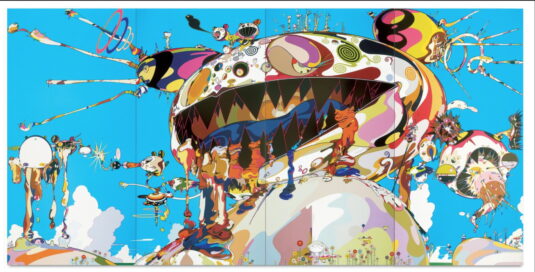 VANCOUVER ART GALLERY, VANCOUVER BC - February 3 - May 6, 2018
By Michael Turner
Only a handful of contemporary visual artists, at any one time, achieve the kind of status traditionally held by film actors and pop musicians – and more recently, YouTube sensations. Among them is 56-year-old Japanese artist Takashi Murakami, a protean figure in the global art scene who works in painting and sculpture to create worlds, both gnarled and explosive, and whose theoretical writings have laid the foundation for both a method and an ethos, what the artist refers to as Superflat.
Visitors to this 50-piece touring retrospective initiated by the Museum of Contemporary Art Chicago can expect to learn how Murakami arrived at his concept of Superflat through a research-based practice focused on a cultural history that includes Buddhist folk traditions, anime and manga, and the proliferation of digital images we find ourselves adrift in today. Of equal importance is the artist’s technological development. Trained in the Nihonga style, Murakami’s early 1980s fusion of traditional Japanese materials and imagery with contemporary themes is an important moment in 20th century art.
While the exhibition ranges from the artist’s earliest works – his mid 1980s acrylic-on-canvas paintings – to his more recent and oft-seen large-scale projects, The Octopus Eats Its Own Leg features four new works created specifically for the gallery: an imposing five-metre-tall sculpture and three multiple-panel paintings. For those already familiar with Murakami through reproductions, the exhibition includes the painting that sent him into the stratosphere: the deliriously colourful and especially toothy Tan Tan Bo Puking – a.k.a. Gero Tan (2002).
vanartgallery.bc.ca