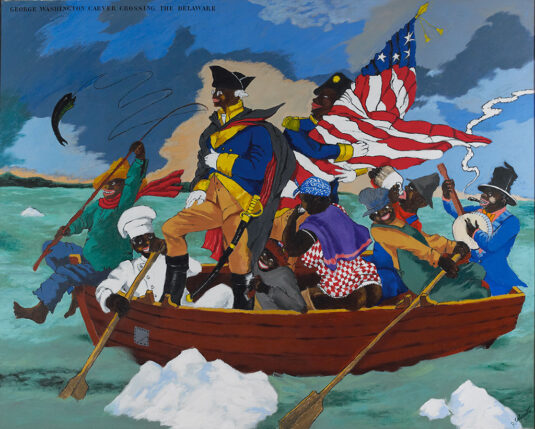 SEATTLE ART MUSEUM, SEATTLE WA - February 15 - May 13, 2018
By Matthew Kangas
Participating in Black History Month, Seattle Art Museum curator Catharina Manchanda has organized a survey of three leading African-American artists, including the late Robert Colescott, who lived in Seattle in the 1950s, when he passed as a white man. His subsequent fame rests on repainting iconic American artworks such as Leutze’s Washington Crossing the Delaware River (1851), which he repopulates with Black rebels. European masterpieces by Picasso, Manet and others are not left out of the artist’s scathing reconstruction of art history. Kerry James Marshall, who teaches at the School of the Art Institute of Chicago, was hailed last year for a huge Whitney Museum of American Art retrospective that surveyed his scenes of ghetto life. Thomas continues both artists’ efforts of dredging up American history to reconfigure it as reflective of forgotten figures, events and places.
All three artists satirize or spoof aspects of American history, including the histories of advertising, popular culture and household products. Marshall drew upon memories of his childhood in Los Angeles. Mickalene Thomas is making all her new work specifically for the Seattle Art Museum. Newly acquired by the museum is Colescott’s take on Picasso’s Les Demoiselles d’Avignon, his Les Demoiselles d’Alabama (1985).
Manchanda has compiled a full-color catalog with artist interviews and essays by critic Jacqueline Francis and Colescott biographer Lowery Stokes Sims. By reclaiming a genre that purports to document history, all three artists show in their very large canvases that history is not only written by the victors; it is subject to who the storyteller happens to be.
seattleartmuseum.org