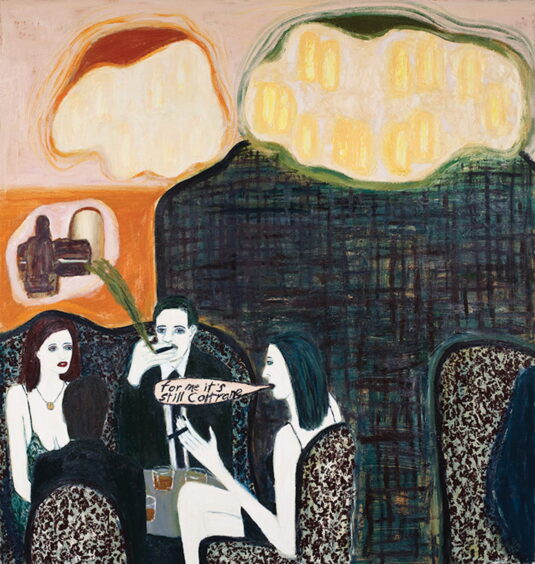 KELOWNA ART GALLERY, KELOWNA BC - To March 18, 2018
By Michael Turner
A picture is said to be worth a thousand words. A work of short fiction, like those that appear regularly in The New Yorker, is generally more than that. The short fictions that run throughout Gary Pearson’s latest exhibition catalogue, and in some instances in the exhibition’s drawings and paintings, are considerably smaller. As for the drawings and paintings that do not include text, they are ambiguous enough to inspire novels.
Short Fictions is comprised of 50 works of painting, drawing, film and video made by Pearson over the past 15 years. Although their inspiration is drawn from the Kelowna-based artist’s travels in North America, Europe, Africa and Australia, their narrative structure is remarkably consistent, as is their style, which blends 1920s German expressionism with, as critic Aaron Peck points out in his Sebaldian catalogue essay, “a colour palette of near-monochromes, at times matching the colours of the Okanagan winter.”
An exemplary work is Pearson’s large oil-on-canvas painting Anna’s Piano Bar and Smoking Room (2011). Here, two women and a man dressed in cocktail wear sit around a table sipping drinks and smoking cigars. The treatment of the room is variously figurative and abstract, with Abstract Expressionist chair patterns and an upper segment that appears to have drifted in from an Edvard Munch sunset. The speech bubble from the woman in profile reads “for me it’s still Coltrane” – the temporal reference “still” implying that contemporary urban culture continues to take its cues from 1950s American cool.
kelownaartgallery.com