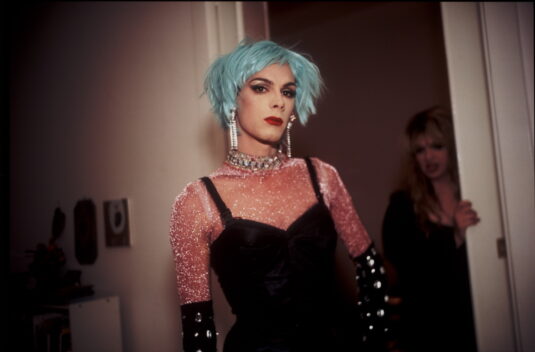 LEGACY DOWNTOWN, VICTORIA BC - To March 29, 2018
By Christine Clark
Trans Hirstory in 99 Objects is an inspiring exhibition of contemporary art and archival materials gleaned from the University of Victoria’s Transgender Archives. Guest curator Chris E. Vargas is an artist and performer based in San Francisco CA, and is also the executive director of MOTHA, the Museum of Transgender Hirstory & Art, which has been described by Vargas as “an imaginary museum”. Founded in 2013, MOTHA was awarded a 2016 Creative Capital grant, and is like a pop-up museum, moving from city to city, transforming local publicly and privately held archives, as well as works of art, into fascinating explorations of transgender community and history.
The first iteration of Trans Hirstory in 99 Objects took place in 2015 at ONE National Gay & Lesbian Archives at the University of Southern California in LA. The second was held at the University of Washington’s Henry Art Gallery. The third opens the door to the much lauded Transgender Archives at UVic, where its collection was founded in 2007 by Aaron Devor, the academic director of the archives.
The archives include materials documenting the history of trans, gender non-binary and Two-Spirit individuals and communities across North America and Europe. Many of these materials are over 100 years old. On view at the Legacy is a fresh and sometimes very touching collection from the archives, including drawings, photographs, video art and performance work, paintings, ephemera, magazines, and some riveting music by Wayne County & the Electric Chairs.
uvac.uvic.ca