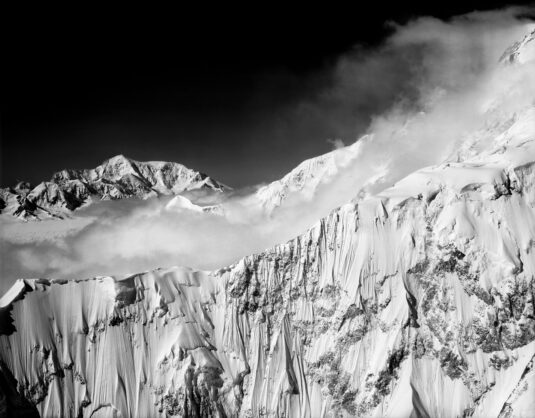 Encounters with the Sublime: Bradford Washburn & Sebastião Salgado
Passion & Purpose: Carbon Prints & Photogravures by Jon Goodman
WHYTE MUSEUM OF THE CANADIAN ROCKIES, BANFF AB - February 3 - April 8, 2018
By Michael Turner
The sublime, as a subject in visual art, often brings to mind Caspar David Friedrich’s magnificent Chalk Cliffs on Rügen (1818). “Close your bodily eye,” wrote Friedrich, “that you may see your picture first with the eye of the spirit. Then bring to light what you have seen in the darkness, that its effect may work back, from without to within.” Friedrich is referring to his painting process, but his words could apply equally to what happens in the darkrooms of photographers Jon Goodman, Sebastião Salgado and Bradford Washburn.
A highly regarded photojournalist, the Brazilian-born, Paris-based Salgado, now in his mid 70s, set out in 2004 in search of the world “as it was, as it was formed,” says Genesis Project inaugural curator Lélia Wanick Salgado. Eight years later, after sessions in both hemispheres, Salgado returned with black-and-white pictures of steamy rivers, iceberg castles and the subject of his current exhibition: the Yukon’s Kluane National Park. American-born Washburn (1910-2007) is another Kluane enthusiast, a mountaineering museum director who took up the camera to document his climbs.
Also on display are the photographs of American master printer Jon Goodman. Although every bit as spectacular in content as the landscapes of Salgado and Washburn, Goodman’s pictures are not the result of awe-inspiring cross-continental excursions or death-defying mountain climbs, but of a level of technical excellence that allows viewers to come that much closer to his subjects. In Late Sun and Shadow, King’s Landing, Columbia Mountain (2015), you can feel the crunch of snow underfoot.
whyte.org