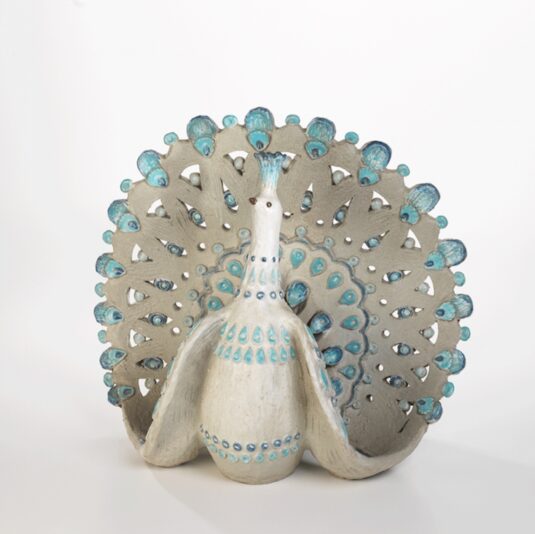 WEST VANCOUVER MUSEUM, VANCOUVER BC - To March 10, 2018
By Michael Turner
The story of ceramics in British Columbia art is a furtive history that includes artists who received their training in the medium – Glenn Lewis was a student of Bernard Leach –, who shared their lessons with others – Gathie Falk was a protégé of Lewis –, only to move in multiple artistic directions. Some ceramicists, like Wayne Ngan and Charmian Johnson, held the course and continue to produce intelligent bowls and vases, while others, like Japanese-born Thomas Kakinuma (1908-1982), are returned to us by thoughtful curators.
The poignancy of Kakinuma’s small figurative sculptures, which he was known for amongst collectors keen to accent their stark mid-century furniture, appears more so when viewed in relation to the artist’s own story. At 29, Kakinuma immigrated to Vancouver en route to Paris, where he hoped to study Art. But, World War II intervened. After studying drawing and painting in Toronto, New York, then Toronto again to study ceramics, Kakinuma returned to Vancouver, where he taught at UBC’s Pottery Hut.
It was in 1950s Vancouver that Kakinuma developed his reputation as a maker of animals. “The birds are quick to produce and easy to sell,” he said of his figurines, “but I would really like to work on a one-man show, rather than making small items for stores.” Indeed, for Kakinuma the goal was to make large abstract sculpture. Although he realized his ambitions, through participation in important exhibitions and awards that allowed him to study in Japan and Mexico, it has taken this long for us to hear from him again.
westvancouvermuseum.ca