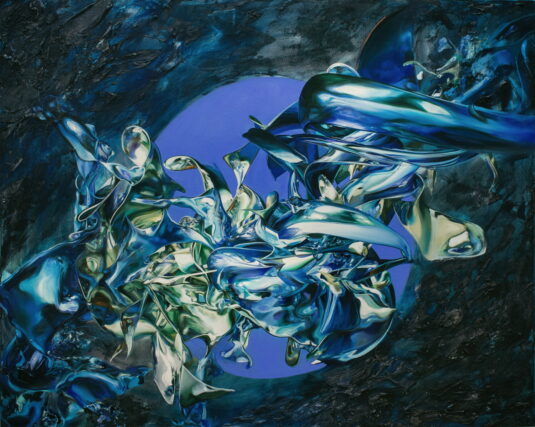 IAN TAN GALLERY, VANCOUVER BC - February 3 - 28, 2018
By Michael Turner
The life of an exhibiting artist rarely begins with any seriousness before the age of 30. But when word spreads that one has, the apprised critic approaches the work with equal parts excitement and dread. Of course, there are few things more satisfying than a first look at the work of an artist who has found a different way of composing with familiar materials. Kraynyk is in his mid 20s, a painter drawn to abstraction and fantastic figuration. This is his first solo exhibition in Vancouver.
Born in Russia, Kraynyk and his family moved to Siberia when he was seven, then to the Ukraine, where he became involved in graffiti art. After he finished high school, the family moved to Winnipeg. In 2013, during his final year at the University of Manitoba, he completed a 70 metre campus mural in a tunnel that, appropriately enough, links Extended Education and Architecture. Another linkage, given the mural’s space age imagery, is energy to mass and velocity.
For his current exhibition, energy, mass and velocity are again present in a series of large-scale oil paintings that combine the daring energies of graffiti art with the ferocious motion of Futurism. But rather than arrive at his forms from First World War battlefields, as the Futurists had, Kraynyk divined his from digital sculpting and chance operations. The results convey contradictory conditions. In Fulgar (2017), the saxophone-like shape at the centre is as tense as it is fluid. Like the craziest jazz, it appears to both come apart and come together at once.
iantangallery.com