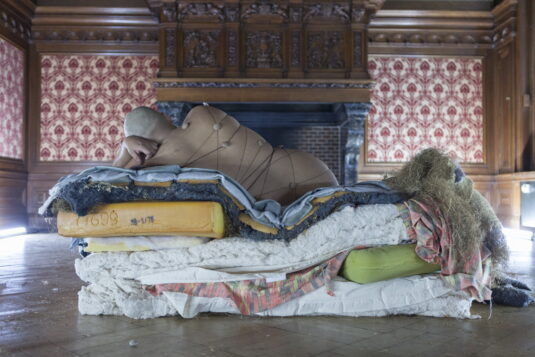 GRUNT GALLERY, VANCOUVER BC - To April 21, 2018
By Michael Turner
A distinguishing aspect of the Vancouver art scene in the early 2000s was a level of critical and commercial recognition achieved by at least two generations of artists from various backgrounds, working in a variety of media. While performance continued to attract younger artists curious about the body and its relationship to narrative space, one student at Emily Carr University of Art + Design (ECUAD) took to it with a degree of commitment not seen since the 1970s: Naufus Ramírez-Figueroa.
Born in Guatemala City in 1978, Ramírez-Figueroa immigrated to Vancouver in the early 1980s. In 2004 he enrolled at ECUAD and became a fi xture at artist-run centres and a participant in the LIVE Biennale. Then, just like that, he was gone. First to the Art Institute of Chicago for an MFW in 2008 – then everywhere. In 2015 he was a German Academic Exchange Service (DAAD) fellow in Berlin. That same year he performed at the Tate Modern. In 2017 he participated in exhibitions at the São Paulo Biennial, the Venice Biennale and the Solomon R. Guggenheim Museum.
Ramírez-Figueroa’s exhibition consists of six wall-mounted videos that feature a series of interrelated performances staged for the camera. One of these videos (his Tate performance) includes an interview with the artist, where he speaks of his childhood recollections of war torn Guatemala, a recurring theme in much of his work. Although they are intense, and at times unsettling, Ramírez-Figueroa is able to feather his performances with humour and abstraction – a powerful combination.
grunt.ca