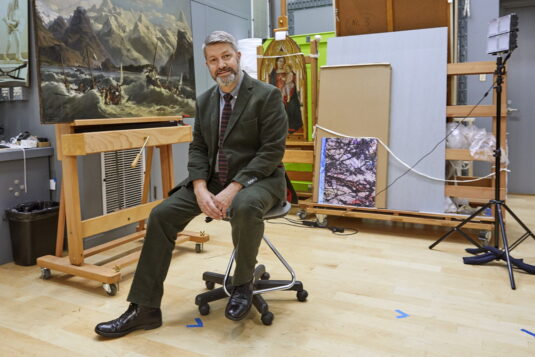 SEATTLE ART MUSEUM
By Matthew Kangas
Seattle followed Vancouver, Portland and Los Angeles in attaining its own in-house, art museum painting conservation department, but when Seattle Art Museum (SAM) director Mimi Gardner Gates hired Nicholas Dorman out of the Metropolitan Museum of Art in 2001, fresh from the Alte Pinakothek, Munich, as its first chief painting conservator, she got more than a rising star in a complex and often controversial field.
British-born, Dorman trained in Newcastle and at Oxford Polytechnic and spent his apprenticeship in Munich at the Dörner Institute, helping “repair air-attacks on Dürer paintings,” Dorman said. Seventeen years later, Dorman is running SAM’s conservation department and studio in the downtown building, and currently building the new Asian Paintings Conservation Center in SAM’s former 1933 Art Moderne building, now the Seattle Asian Art Museum. When completed in 2019, the center will have a visitor-viewable lab where the “seven hundred Japanese paintings that need rematting” are worked upon, Dorman said. “That’s thirty-five years of work! And by then, there’ll be more…. Light levels, climate control, staff training: it all has to continue.” Thanks to the Mellon and Gates foundations, it will for some time.
Queried about advice to younger people interested in an art conservation career, he volunteered: “Anyone who has art and science interests. I was always interested in botany and chemistry as a kid, but then I was always making things, too…. By all means, learn languages! [Dorman speaks English and German.] Visit conservation studios if you can. Call people up! If you’re going near one, like the Canadian Conservation Institute in Ottawa, ask to go in. In America, there are programs based in Delaware, Buffalo, New York and the Getty in LA.”
As for garage sale hounds and Goodwill sleuths, Dorman suggested, “If you’re looking all the time, scavenging and scouring, you’ll find something that hasn’t been cleaned. Look beyond the dirt and the dust of it. Yes, it can be worth it.”
seattleartmuseum.org