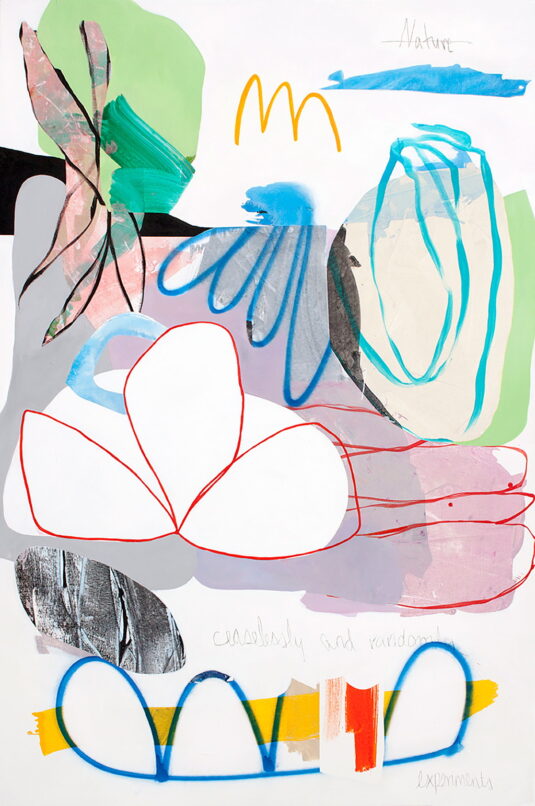 HERRINGER KISS GALLERY, CALGARY AB - April 12 - May 12, 2018
By Michael Turner
On the evening of September 7, 2017, those passing the Georgia Street side of the Vancouver Art Gallery were treated to a program of projections that saw Francis Rattenbury’s neo-classical façade lit up with images by local artists. While past responses to the façade have varied – from working within its structure (Neil Campbell) to its decorative abstraction (Eric Metcalfe) – Fiona Ackerman’s Over the Garden Wall (2017) drew attention to the building-as-barricade through imagining what might lie behind it.
The rhythms, shapes and colours afl oat in Ackerman’s projection are familiar to those who know her canvas paintings, many of which result from her thematic research projects. In Grasslands, Ackerman produced a number of oil-and-acrylic works based on garden utopias; in Studio Paintings, she visited the studios of artists such as Jessica Eaton, Atilla Richard Lukacs and Lawrence Paul Yuxweluptun. “I see my arc of work much like that of an author,” writes Ackerman on her website. “Each series is like a book, different in tone, style and story.”
For her current exhibition, Ackerman has not so much chosen a destination from which to make a new “book,” but an approach toward it. In this instance, the mode is derived from dance, and the objective is less the marks themselves than a record of their gestures – “an invented nature...performed through delicate, deliberate steps.” These movements are apparent in works like 100 Titles (2018), where choreographies of botanical forms are reduced from fl ower to petal in an effort to return us to the individual plant.
herringerkissgallery.com