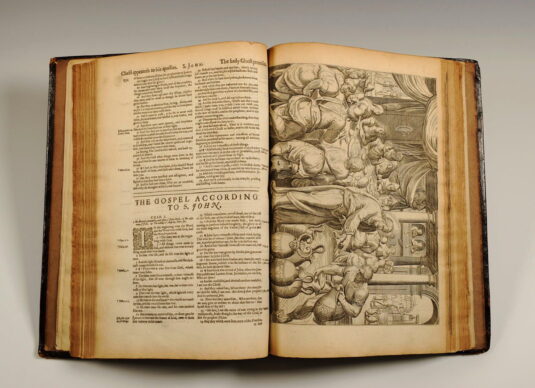 HALLIE FORD MUSEUM OF ART, SALEM OR - To April 29, 2018
By Allyn Cantor
The impetus for this exhibition was the discovery of a well-preserved first edition of the King James Bible printed in Cambridge, England in 1629. The rare volume contains more than 100 full-page Old Master engravings from the latter half of the 1500s. The Dutch and Flemish artworks in this Bible were added to the book after its original printing. “What makes this particular Bible remarkable is that it represents the only known English Bible with engravings dating from the 16th century,” states Bruce Martin, president of Historic Bibles & Engravings in Albany, OR. This one-of-a-kind historic book and its 110 prints can be scrolled through at the exhibition via touch screens.
The fact that for a period of roughly 100 years images were not allowed in English Bibles due to an interpretation of the Second Commandment and the religious preferences of the reigning monarch adds to this Bible’s uniqueness. The legalization of pictures in English Bibles came about in 1660 and by 1662 a new Book of Common Prayer was printed, making the Hexham Abbey Bible passé, contributing to its nearly flawless condition.
The exhibition also presents a collection of 35 prints from the 16th century, including copper engravings by renowned Dutch and Flemish artists, as well as pieces from the same period as those found inside the Hexham Abbey Bible.
Curated by art historian Professor Ricardo De Mambro Santos, a scholarly catalog investigating the signifi cance of this unique Bible is complimentary, online, at the Hallie Ford Museum of Art’s website.
willamette.edu/arts/hfma/