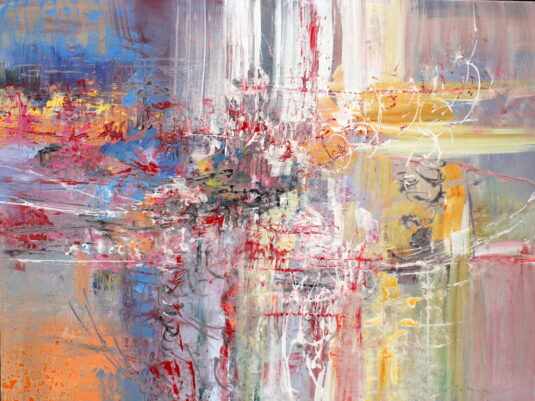 MADRONA GALLERY, VICTORIA BC - May 19 - June 1, 2018
By Christine Clark
Ernestine Tahedl at the Madrona Gallery is a wildly expressive exhibit of large-scale acrylic paintings, an explosion of colour, a riot of dabbing, splashing, scribbling, smearing paint marks and an energetic, emotionally exhilarating celebration of joy.
A painter, stained glass artist and muralist for at least half a century, Tahedl says in a 2016 interview with the Royal Alberta Museum (RAM) that making art is “what I’ve lived for my whole life to hopefully enrich to a certain extent the society and culture.” Tahedl is discussing her career and the nine 11-feet-tall mosaic murals she created in 1965 for Edmonton’s Canada Post building, which have been repurposed and are now an integral design element of the new RAM.
Born in Vienna in 1940, Tahedl studied at Die Angewandte (University of Applied Arts Vienna) and later worked with her father, Professor Heinrich Tahedl, a stained glass artist, before moving to Canada in 1963. Throughout her career, Tahedl has been feted, earning opportunities and distinctions both nationally and internationally, including the Graduation Prize of the Austrian Government in 1961, a Canada Council Arts Award and the Mayor’s Prize at Kyoto, Japan, both in 1999, as well as the Queen’s Golden Jubilee Medal in 2002.
Of her latest paintings, reminiscent of cascading fl oral bouquets, Tahedl writes that “the Series comes close to a musical experience and was painted and inspired while listening to classical music…These paintings are a more direct, human and spiritual expression without confi nement of the motif or formal restriction…I hope that spirituality and serenity are integral to my work.”
madronagallery.com