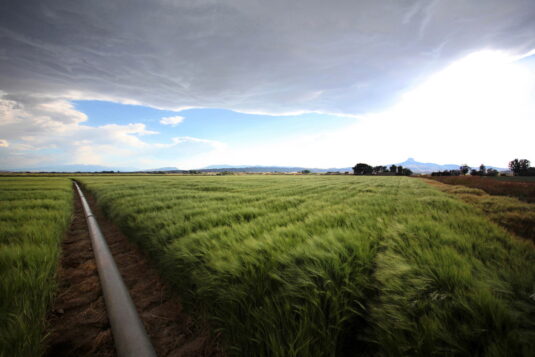 IMOGEN GALLERY, ASTORIA OR - April 14 - May 8, 2018
By Allyn Cantor
Don Frank is a well-known photographer on Oregon’s North Coast. This first solo show at Imogen Gallery is the culmination of a two-year project that is presented as both an exhibition and a book of the same title.
Frank set out to document small family farming in America today in rural communities in the Great Plains. Through several trips to the towns of Julesburg CO, Big Springs NE and Powell WY, the artist tirelessly shadowed his farming cousins. His imagery captures the beauty of Middle America’s fl atlands, while highlighting the lifestyle that formed the foundation of his family for generations.
Through Frank’s travels and research, he learned of the migration of his family from Germany to Russia and then to the Western USA, where his great-grandparents and their numerous children settled and farmed. Countless interviews with close relatives reveal stories of his extensive family tree. Frank’s images are accompanied by interwoven texts from three or four family voices, recreating the essence of place, people and individual lineage, to pave a path to today. Frank’s personal familial journey can be seen as a refl ection on the ideals of the American Dream, captured in simple dialogue: “The idea is that we were Russian peasants and now we are American peasants. Rothammel was in the middle of nowhere, just like Julesburg.”
This is a story validating that the majority of Americans are From Somewhere Else.
imogengallery.com