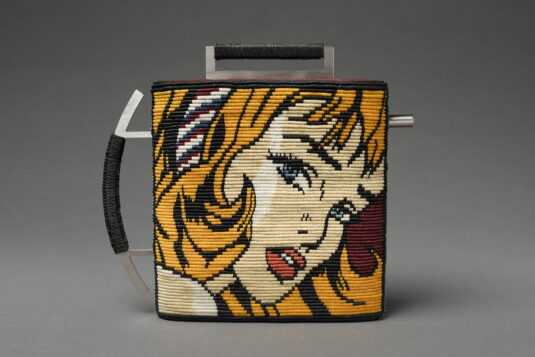 WHATCOM MUSEUM, BELLINGHAM WA - To May 6, 2018
By Matthew Kangas
Whatcom Museum has brought the largest touring survey in years of historic and contemporary basket-making and supported it with local surveys and special viewings of objects from the permanent collection. With Whatcom its only West Coast venue, Rooted, Revived, Reinvented: Basketry in America is organized by the University of Missouri’s Museum of Art and Archaeology, which has rich basketry holdings, such as a coiled feather basket from the Yokuts tribe of Central California; a 1903 spruceroot lidded basket by the Quinaults on the Olympic Peninsula; and a rattle-topped basket from the Tlingit tribe in southern Alaska.
Continuing with the granddaddy of the New Basket movement in the 1960s, Berkeley professor Ed Rossbach dared to put Mickey Mouse on a coiled basket, soon followed by Kate Anderson’s version of the Disney icon lifted from both Andy Warhol and Keith Haring. Soon, every imaginable material possible was being used for baskets, including stainless steel cable. Mainstream artists established themselves as major practitioners. John Garrett, Gyöngy Laky, John McQueen, Norma Minkowitz, Jane Sauer and Kay Sekimachi, all on view, are major figures from the 1980s and 1990s, with huge museum shows, coffee-table books and catalogs of their own. To see only one of each example hurts, but is typical of this kind of craft show, more akin to state-fair curatorial philosophies than in-depth art museum examinations. Whatcom is, after all, a history and art museum. All the same, there are valuable examples of Gullah art from the Deep South; contemporary Native American riffs on the medium; and rare Ojibwe-Chippewa artifacts, among other treasures.
whatcommuseum.org