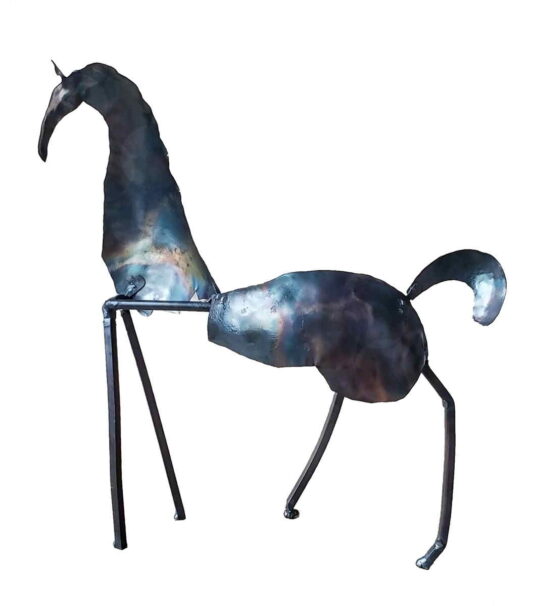 BLACKFISH GALLERY, Portland OR - May 5 - 30
by Allyn Cantor
The three artists in this show have very different approaches to the mechanics of sculpture and space, informed greatly by both method and media. Steve Tilden is known for his work with welded steel and various mixed materials. His current pieces are more minimally constructed than past artworks. Using shaped metal and spot welding techniques, the artist creates an implied gesture and volume in his subjects, which mostly feature horse and animal forms as well as legendary characters from Greek mythology like Icarus and Cerberus. Many of these sculptures are collaborations with glass artist Jen Fuller, who shares studio space with Tilden. Fuller adds delicately cast glass elements to Tilden’s rugged metal foundations. The duality of materials creates a striking conversation within these compelling pieces.
Stephan Soihl’s kinetic sculptures pay homage to the principles of physics. He uses Plexiglas forms filled with colored oils that shift, rotate and tilt, mobilizing the viscous material. Set into precisely contoured brass forms, these formal works are animated with the use of micro-controllers, electrical motors, pumps and solar panels that together create a time-based movement. The mesmerizing pieces have a minimalist beauty that plays with refracted light, recalling the relationship between science and art.
Howard Neufeld, a recently retired long-time professor at Mt. Hood Community College, makes sculptural paintings that refl ect upon the balance of chaos and order. His artworks imply motion through controlled painted forms that draw upon principles of geometry and formal aesthetics. Neufeld uses non-objective abstraction to coalesce the intrinsic forces that push between fractal geometry, structure and visual perception.
blackfish.com