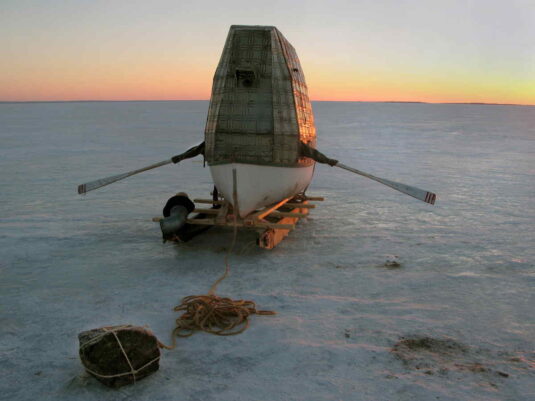 KAMLOOPS ART GALLERY, Kamloops BC - April 9 - June 27
by Michael Turner
This retrospective exhibition brings together works in sculpture, video, photography and drawing, in addition to preparatory modelling and ephemera, by an artist whose practice spans 40 years. Based in Kamloops, B.C., Donald Lawrence teaches at Thompson Rivers University; his research interests focus on the intersections of art, science and technology, particularly where they meet – and determine – concepts of “wilderness.” A common theme running through Lawrence’s work is the image and its capture.
Recently, Lawrence has shifted his attention from experiential journeys with pinhole cameras to the history and endurance of the camera obscura. His large-scale public artwork Comet MMXVIII (2018) is one such work. Comprised of salvaged materials and “obsolete” technologies, Comet sits atop the entrance of the Thompson-Nicola Regional District building. For this exhibition, Lawrence produced a new camera obscura, which he placed on the canopy of the neighbouring Paramount Theatre, where viewers can experience it in person and in relation to camera obscura works in the gallery proper.
Lawrence is a much-appreciated community figure and the recipient of numerous accolades.In 2017, he was the recipient of the Kamloops Mayor’s Award for the Arts – Artist of the Year, and he was the first chair of the City of Kamloops’ Arts Commission. From 2013 to 2019, he led the Camera Obscura Project, a program of research funded by the Social Sciences and Humanities Research Council that involved students, emerging and established artists, and scholars from various disciplines. Following this exhibition, the KAG will produce an extensive monographic publication, to be launched in 2021.
Exhibition tour April 9, 5:30-6:30pm (check website for updates)
kag.bc.ca