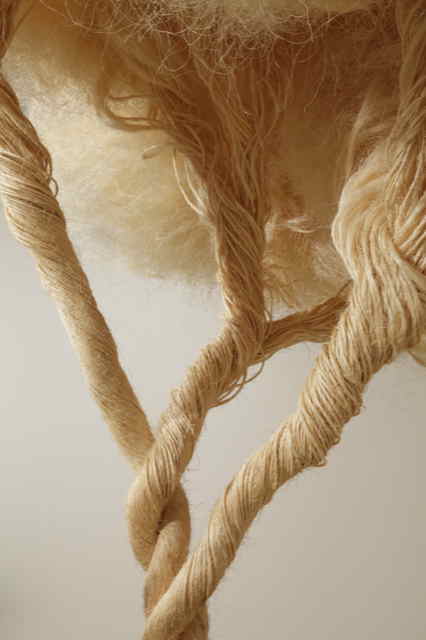 EMPTY GALLERY, VICTORIA BC - To April 11
By Christine Clark
London, Ontario–based sculptor and multimedia artist David Merritt is exhibiting one of his large, tornado-shaped sisal pieces at Victoria’s newest contemporary art space, Empty Gallery. Founded by Matt Trahan, Empty Gallery opened in April 2019 with a mandate to provide exhibition space for professional artists from across Canada.
Merritt is a professor of visual arts at Western University and has exhibited his work widely. According to Trahan, this sisal piece, titled aweigh, does not have “specific dimensions. It will fill the entire height (12 feet) of the space and unravels outward as it rises from the floor.” First exhibited at the Art Gallery of Hamilton in 2010, aweigh is the third rendition of the original and is specific to the space at Empty Gallery.
Merritt writes that his “multimedia practice explores the commonalities and fault lines between human and non-human systems. His process-driven, conceptually oriented work develops out of the material and performative possibilities of drawing’s expanded fi eld. Whether works on paper, sculptural or media based, the projects seek to actualize the dynamics of time – teasing out the urgencies, and emergences, of a common present placed on the cusp of disappearing.”
Much of Merritt’s work appears to investigate natural objects and processes, such as windstorms, the pooling of water or the growth patterns of twigs. Aweigh is especially evocative, bringing to mind visions of Dorothy and the Wicked Witch of the West suspended and cycling, around and around inside a tornado. Large storms, whether they bring snow or wind or rain, can be delightfully surreal, taking us into expected circumstances, and now, in the era of unstoppable climate destruction, weather patterns remain awe-inspiring even as they grow more and more threatening.
emptygallery.ca