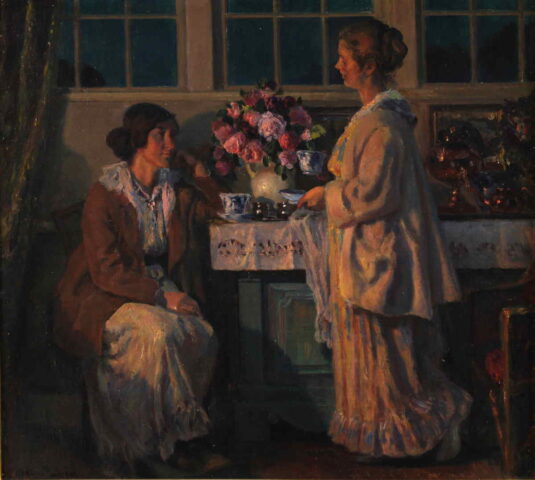 UNO LANGMANN LIMITED, Vancouver BC - Through April and May
by Michael Turner
Now in its sixth decade, Uno Langmann Limited is an intergenerational family-run gallery
focused on European and North American paintings from the 18th, 19th and 20th centuries, in addition to antique furniture and objets d’art. Unlike white cube displays, where paintings are placed evenly along a horizontal line, Langmann’s exhibitions are hung salon style amid sideboards, mantel clocks, porcelain lamps and marble chess sets. This April, Langmann presents The Academic Style, followed in May with Representing Rural Life.
Most notable in The Academic Style is Marcus Stone’s canvas The Interrupted Duel. One of the most celebrated paintings in the Royal Academy exhibition of 1868, this highly theatrical work is set outside a horse stable, where a young cavalier, perhaps eager to avenge a slight, moves toward an older, more reserved gentleman. Standing in the younger man’s way, “his ladye-love.” Upon its debut, The Interrupted Duel received favourable notices from The Art Journal and the Illustrated London News, whose compliments extended to both the picture’s narrative composition and its subjects’ emotional state.
Among the leading works in Representing Rural Life are the canvases of Viggo Pedersen (1854-1926). In Two Ladies Drinking Tea, a woman sits at the end of a cloth-covered side table, her head against her left hand, while another woman stands before her, cup in one hand, saucer in the other. Unlike the youth-driven confrontation in The Interrupted Duel, the women facing off in Pedersen’s picture are more evenly matched. Indeed, the more you look at this composition, the more you notice its subtle shifts in power.
langmann.com