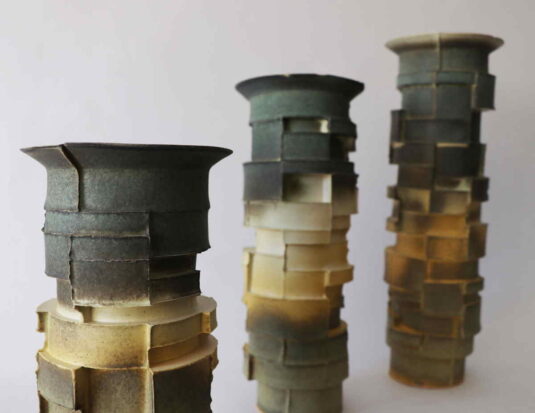 LIPONT GALLERY, Richmond BC - May 15 - June 16
by Michael Turner
When reflecting on a quarter-century of internet ubiquity, it should come as no surprise that certain contemporary artists sought refuge in traditional handcrafted media, such as ceramics and weaving. Initially, this shift manifested in the integration of clay or fi bre into hybrid sculptural forms – to “make it new,” as Ezra Pound exclaimed in an effort to vivify literature in the 1930s. But as interest in ceramics grew, so too did an interest in the medium’s fundamentals. Both innovation and tradition form the basis of Earthbound.
This 15-person exhibition features a range of works by emerging artists of diverse practices and backgrounds, all of whom have studied and trained in British Columbia. Some, such as Mitra Mahmoodi, have taken to mounting their three-dimensional works on the wall. For Dora Chen, utilitarian objects like plates are given piercings and sport closed-hoop “earrings,” a gesture that extends beyond ornamentation to question the nature of language (is an earring still an earring if it is not attached to an ear?).
In his curatorial statement, Anthony Dunlop writes: “With the earth as a framework, the very production of ceramics is working against the speed in which we consume in this contemporary moment. These objects halt the production line and necessitate a more localized making; they are objects requiring extended looking. Living in the age of digital communication and dissemination, ceramics are ever-present on digital platforms, [and] each artist engages with digital sharing uniquely. When new communities engage with the work, a new perspective on the land we share is formed.”
lipontgallery.ca