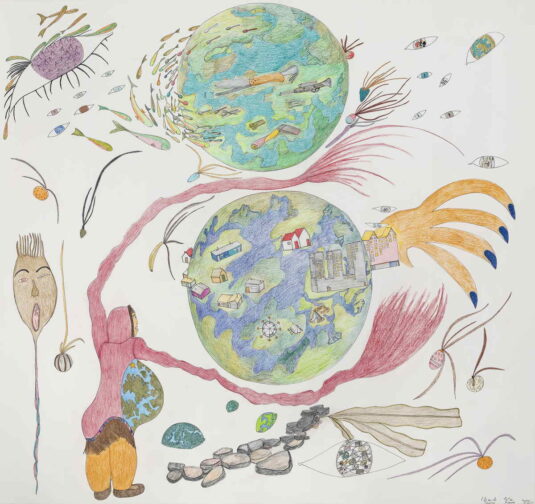 VANCOUVER ART GALLERY, Vancouver BC - To May 24
by Michael Turner
This touring exhibition, curated by art historian Nancy Campbell, features drawings by Inuk artist Shuvinai Ashoona (b. 1961) made over the past two decades. Using graphite, coloured pencil, ink and paper of various sizes, Ashoona documents exterior life in Kinngait, Baffin Island, in addition to her highly imaginative interior world, inspired in part by comics, television and the internet.
Ashoona comes from a family of artists. Pitseolak Ashoona is a grandmother, Sorosilooto Ashoona is her mother and Annie Pootigook a cousin. When Preview asked her about the influence family members had on her artistic development, she replied: “I remember pencils given to me, and small pieces of paper. My first drawings were landscapes. I followed around my grandmother, and I watched my mother draw. I drew on paper, around where Annie used to live. Annie told me what to draw. We drew after school.”
When asked about larger trajectories in her 30-plus-year career, such as her infrequent use of horizon lines, Ashoona said she makes skies “once in a while ... but I don’t put them where skies are supposed to go.” As for the recurrence of kelp forms: “I draw the kelp because they keep coming back.” On working with curators over that span, in particular their pairings of certain works and their relationship to each other, as in Untitled (Birthing Scene) (2013) and Greenlandic Man (2016), she replied: “They are cousins. They live far apart. Nancy brought them together.”
As a final question, Preview asked Ashoona if she had a response to a question not yet asked: “I would like my work to go to the places that come from TV and the [computer] games younger people play. Places like Europe.”
vanartgallery.bc.ca