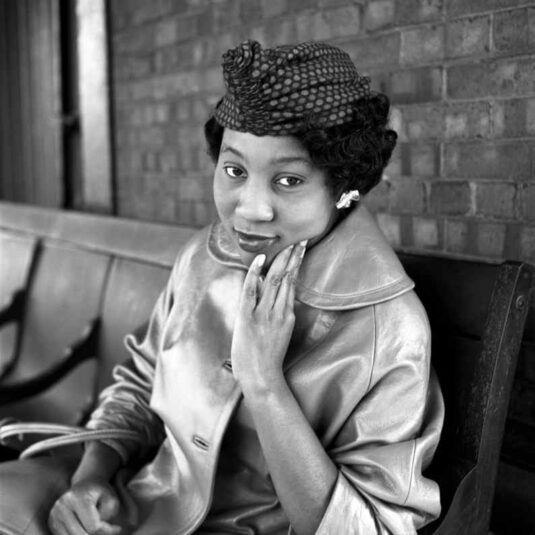 GLENBOW, Calgary AB - To May 24
by Michael Turner
Born in 1926 to a French mother and an Austrian father, Vivian Maier spent her first 25 years shuttling between her New York City birthplace and her mother’s family in France. In 1956, at the age of 30, Maier moved to Chicago’s affuent North Shore suburb, where for the next 40 years she worked as a nanny. On her days off, she secretly took pictures, usually with a medium-format camera. Shortly before her death in 2009, a number of these visually arresting and rarely shared pictures began to appear online.
The story of how Maier’s pictures came into public view would be irrelevant if not for their technical excellence and aesthetic virtue. Fans of Maier will be familiar with Finding Vivian Maier (2013), the documentary co-directed by John Maloof, the former real estate agent who purchased the bulk of Maier’s 100,000-plus negatives at a Chicago auction house for $380. But for those new to Maier, just as well, for the stories her pictures tell rival those of better-known photographers Walker Evans, Diane Arbus and Robert Frank.
Many of Maier’s pictures focus on the everyday lives of women, children, the elderly and the vulnerable. Occasionally we see evidence of the contrary: spectacular, rhythm-breaking events that remind us of our quiet reliance on transit schedules, shop hours and work shifts. In one picture, actor Kirk Douglas arrives at a theatre for the premiere screening of Spartacus (1960); in another, we see a fallen figure, her head resting on a sheet of newspaper, while police and pedestrians look on.
glenbow.org
vivianmaier.com