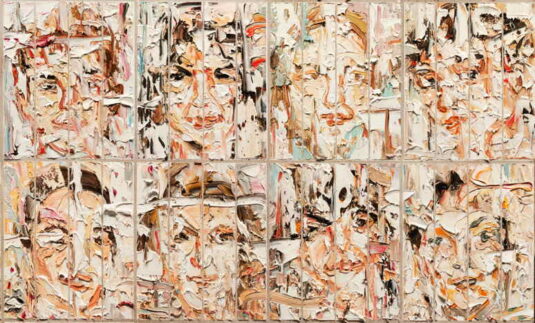 SAN JUAN ISLANDS MUSEUM OF ART, Friday Harbor WA - To May 25
by Robin Laurence
Violence against women is a shocking phenomenon that, in recent years, has preoccupied not only human rights activists but also novelists, dramatists, filmmakers and choreographers. The subject has made its way into the realm of visual art too, as exemplified by two series of paintings, Missing and Highway of Tears, by Salt Spring Island painter Deon Venter.
Often working with images extracted from the media, Venter compels our attention toward two of British Columbia’s most notorious examples of gender-based violence. These are the missing and murdered women of Vancouver’s Downtown Eastside and also along Highway 16 between the cities of Prince Rupert and Prince George. In Vancouver, many women have been identified as victims of serial killer Robert “Willie” Picton; all were sex-trade workers and a disproportionate number, Indigenous. Along what has become known as the Highway of Tears, the murdered and missing are also Indigenous, most of them teenage girls obliged to hitchhike because no safe transportation is available to them. Crimes against these girls have gone unsolved, again speaking to the issue of violence against those little valued by mainstream society.
Venter’s first series of large oil paintings features portraits of the missing and murdered set within geometric grid patterns, the images broken up by his method of alternating thick and thin passages of pigment. In the second series, the artist alternates individual portraits with paintings of flowers, referenced to poems by Mary Oliver. Local as Venter’s references initially appear to be, they also function as startlingly universal, confronting us with the reality of systemic violence against women and girls in every corner of the world.
sjima.org