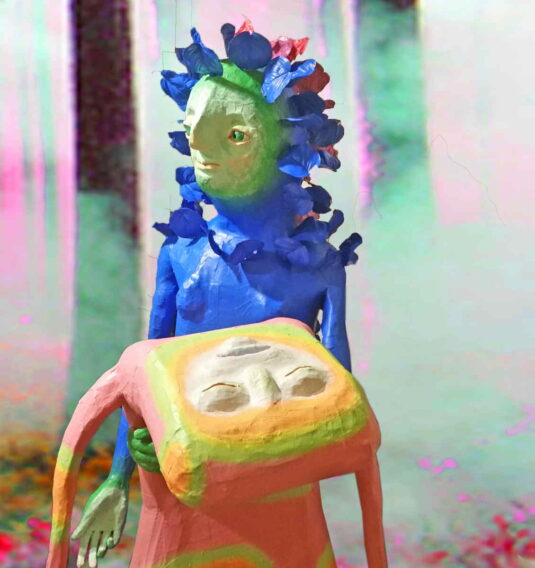 HARCOURT HOUSE, Edmonton AB - May 1 - June 6
by Michael Turner
Between 1978 and 1980, Gary McMillan attended the University of Calgary, with a focus on science and fine art. Throughout the 1980s, he exhibited regionally inspired landscape paintings before completing his formal education at the Alberta College of Art and Design, graduating with distinction in 1991. In 2003, his practice shifted to figures in relation to the natural landscape – an intentionally absurdist project that includes his most recent suite of “quasi-surrealistic” paintings and sculpture, Galapagos.
Taking its title from the famed Pacific Ocean archipelago, where evolutionary scientist Charles Darwin, and later the National Geographic Society, introduced the world to the islands’ unique populations of flora and fauna, Galapagos presents a confusion of human and natural forms in an effort to activate narrative, our desire to extract a story from life’s seemingly disparate array of gestures and events.
“Thematically, I’m inspired by the fi gure and by the idea of play and mischief,” writes McMillan in his artist’s statement. “The contrast between the nice and the not so nice informs much of my work, but rather than presenting a harsh vision of the world, I prefer nuanced misdirection and humour when dealing with unpleasantness.”
Accompanying the exhibition is McMillan’s Galapagos Field Notes. In “Day 10 – Somnolents,” he writes: “Upon our return from today’s excursion in which we had come upon many perplexing scenes of native activity, the Captain informed me there was to be a festive cookout dinner. Within short order, our guide Olpar and some kitchen crew had erected the large solar reflector grill. Soon they were prodding at large colourful native vegetables with long rods, turning them in the scorching heat.”
Opening reception May 1, 7-10pm (check website for updates)
harcourthouse.ab.ca