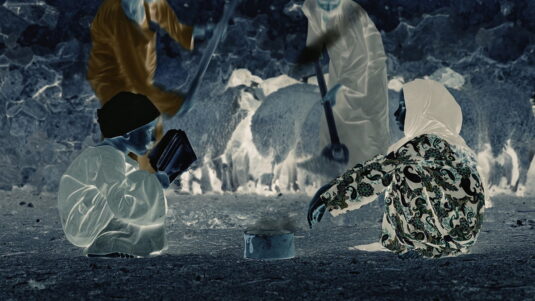 The Polygon Gallery, North Vancouver, BC

THE POLYGON GALLERY, North Vancouver BC - To Jan 12, 2020
by Michael Turner
Although lens-based contemporary artworks are nowhere near as dominant as they were in the early 2000s, they continue to attract audiences. A case in point was The Polygon’s recent mounting of Christian Marclay’s work The Clock (2010), a monumental 24-hour video projection that features minute-by-minute representations of time-telling devices cut and pasted from film and television. As a follow-up, The Polygon has called on another film-based innovator – Wael Shawky.
Born in Alexandria, Egypt, in 1971, Shawky studied at the University of Alexandria and the University of Pennsylvania. His work has been exhibited widely. He has had solo shows at MoMA PS1, the Serpentine Galleries in London and Castello di Rivoli Museum of Contemporary Art, Turin, and been included in the Istanbul Biennial, Sharjah Biennial and documenta (13). In a recent Guardian article, Shawky’s film trilogy Cabaret Crusades (2010-15) was declared the seventh most important artwork produced in the 21st century (Marclay’s Clock was sixth).
For his current exhibition, The Polygon is screening Shawky’s multi-layered Al Araba Al Madfuna trilogy, the latest of which (completed in 2016) was shot in and around the temples of the Pharaoh Seti and Osirion, in the archaeological city of Abydos in Upper Egypt, known today as the village of Al Araba Al Madfuna. Inspired by the artist’s travels in that region, where he observed local people digging tunnels in search of ancient treasures, and by Egyptian writer Mohamed Mostagab’s short story “Sunflower,” Shawky’s theatrical restaging features child actors as fortune seekers. Equally impressive is Shawky’s technical methodology: shooting his film in negative to emphasize the contingencies of myth and history.
thepolygon.ca