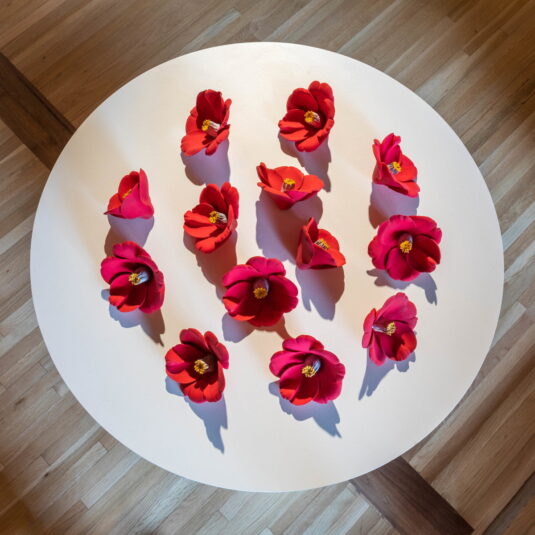 PORTLAND JAPANESE GARDEN, Portland OR - To Dec 1
by Allyn Cantor
Japanese artist and designer Noritaka Tatehana, known internationally for his innovation, is having his first solo show in North America at the Portland Japanese Garden. Tatehana’s designs and craftsmanship are an incredible mix of past, present and future. In a wide range of practices, he looks at Japanese aesthetic history, blending classic and modern forms that honor the traditional craft of his country while having futuristic aspirations.
This exhibition includes works in various media, such as his exaggerated large-scale hairpin sculptures, a series of cloud paintings, several pairs of his famous heel-less shoe designs and works from the Floating World series. Recalling his youth in Japan’s historical capital of Kamakura, the installation Camellia Fields is especially striking in its simple, powerful portrayal of a Japanese view of life and death. Before the modern era in Japan, camellia trees were planted in the gardens of temples and samurai residences. On a visit to his hometown, Tatehana experienced how the petals had fallen from one large camellia tree as whole flowers, leaving a red circle of blossoms highlighting the contours of its roots. This poetic reflection is the basis for Camellia Fields.
Tatehana studied Japanese craft along with fine art at Tokyo University of the Arts. The process, materials and methods of things like dyeing, weaving and embossing are at the core of all his artworks and designs. In the world of fashion art he is renowned for the heel-less platform shoes designed for Daphne Guinness and Lady Gaga. These wearable art pieces recall getas – stacked wooden clogs originally worn by courtesans in Japan’s Edo period – with modern attributes of the Western high heel and platform silhouettes. Tatehana’s works are held in the collections of the Metropolitan Museum of Art and the Victoria and Albert Museum.
japanesegarden.org