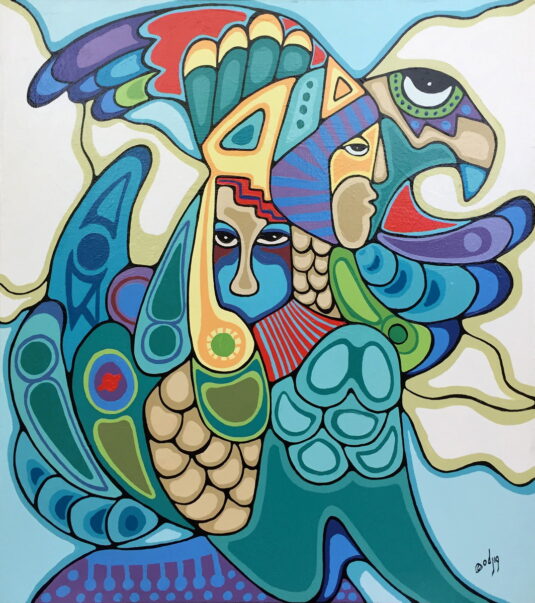 KELOWNA ART GALLERY, Kelowna BC - To Jan 5, 2020
by Michael Turner
This exhibition, so named after the 100th anniversary of the Odawa-Potawatomi-English artist’s birth, is a “capsule retrospective” based on 12 large-scale paintings sourced from local collections. But not just any paintings – these works were selected to highlight different periods in the artist’s long and storied career. And a long career it was! Daphne Odjig only passed away 37 months ago – at the age of 97.
Often referred to as the “grandmother of Canadian Indigenous art,” Odjig is an unparalleled figure who saw in her lifetime a number of transitions in the relationship between the Canadian federal government and Indigenous peoples, but also a shift in the relationship between contemporary Indigenous art (as art, not artifact) and a museum- going public. For her part, Odjig was instrumental in protecting that art through formation of a collective, the Professional Native Indian Artists Inc. (better known as the Indian Group of Seven), in 1973.
Earlier works in this exhibition, like Nanabozo and the Hoot Owls (1969), People of the Forest (1969), and Nanabush and Windigo (1968), reveal an emerging Woodlands artist partial to the darker, confl icting aspects of the human condition, as exemplifi ed by Odjig’s searing, if not angry, use of “flame-like hues.” Later works, such as Messengers of Peace (1991), Canopy of Protection (1987) and Tapestry of Time (1987), relax into a peaceful pastel palatte of blues, greens, violets and corals. Here, figure and background merge, become one, bringing to mind the inextricable relationship between land as parent and fi gure as child.
kelownaartgallery.com