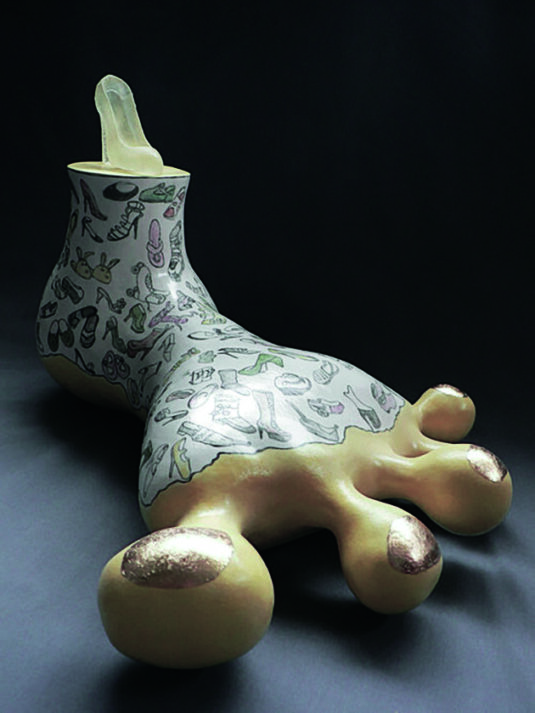 IL MUSEO AT THE ITALIAN CULTURAL CENTRE, Vancouver BC - To Dec 10
by Michael Turner
Malleable is the third and final group exhibition in Il Museo’s Gendered Voices, an ambitious and timely series devoted to the exploration of “contemporary and historic narratives about women, relationships and gender.” Where previous iterations have focused on women’s labour (textiles) and status (marriage), Malleable features the work of 21 women artists working in clay.
Notable pieces include Cinderella (2010) by Amy Chang, a foot- high sculpture of a severed yellow foot with a tiny glass “slipper” placed above the ankle. Never mind that the foot is 10 times larger than the slipper; it is the labourworn, splay-toed state of this foot that, even if it were the same size as the shoe placed atop it, makes it (not the shoe) an impossible fi t.
In Louise Solecki Weir’s Entangled (2019), a mermaid reaches from the water, her hair pulled above her by an errant section of netting. Although the gesture lends itself to a recognition of our increasingly polluted waters, it is also an indictment of those who assume that a woman’s beauty is both her punishment and her salvation.
Another work that features women in abbreviated form is The Return (2019), by Georgina F. Lohan. What at first appears to be a forest of porcelain birch trees carries within one of its trees the face of a woman. Whether the “return” in question concerns this woman’s desire to join those approaching this forest or her reintegration within it is open to debate.
italianculturalcentre.ca