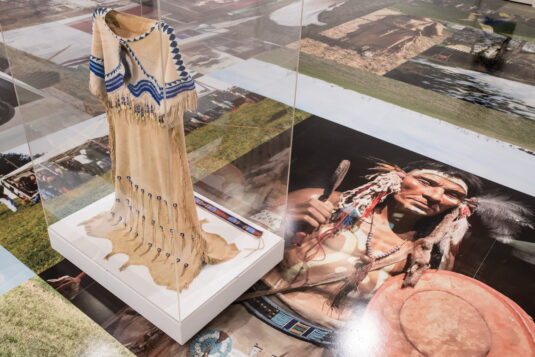 NANAIMO ART GALLERY, Nanaimo BC - To Nov 10
by Michael Turner
In architecture, truth to materials is a twofold principle that refers to (a) the use of materials most appropriate to the structure at hand and (b) the display of those materials in the interest of disclosure. As applied to artist Krista Belle Stewart’s current exhibition, the principle requires some adjustment. In Stewart’s case, it is not a building or an object under view, but a system of relations that have been commodified by capitalism, entitled by empire and justifi ed as homage.
Stewart, a member of the Upper Nicola Band of the Syilx/Okanagan Nation, first came to attention with Seraphine, Seraphine (2014), a video that pairs excerpts from a 1967 CBC documentary on her mother’s journey from her reserve to nursing school with excerpts from testimony she gave at the 2013 Truth and Reconciliation Commission hearings. For her current exhibition, Stewart returned to documentation she had made in 2006 of her meetings with a Germany-based “Indianer” group who, through dress and gesture, act out what they believe to be “the North American Indigenous lifestyle.”
For Stewart, temporal di erences between past and present are never as simple as “before and after” – not when past experiences are embodied and passed on intergenerationally. This past summer, Stewart was invited to participate in a gathering of 1,000 Indianer from across Europe. In what is described by NAG curator Jesse Birch as “a kind of inverted anthropology,” Stewart’s enactment allowed for the completion of her current work, one that has the artist standing in for Truth amid the false premise of the Indianer and their ways.
Note: Krista Belle Stewart is the 2019 recipient of the VIVA Award.
nanaimogallery.ca