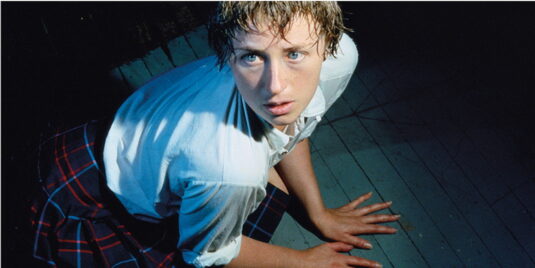 VANCOUVER ART GALLERY, Vancouver BC - To March 8, 2020
by Michael Turner
At a time when the selfie is social media’s leading portrait sub-genre, it makes sense to mount an exhibition by an artist who is arguably its progenitor. However, those familiar with Cindy Sherman know that it is never simply a self-portrait she is showing us, but a self-portrait of the artist as a Renaissance painter’s model or a clown or an art collector. All her life Sherman has been dressing up, donning masks, going to work “in character”; it was only as a photographer that she began to take these personae seriously – to the point where she is now among the best-known artists of the 20th century.
Sherman’s breakthrough work – the work that history will best remember her for – is Untitled Film Stills (1977-80), a series of 69 black-and-white photographs in which the artist performs a number of stereotypical feminine roles (o ce secretary, sexpot, homemaker) common to 1950s and ’60s fi lm noir. For Sherman, these are the roles that have contributed most to how women register in the cultural imagination.
In this long overdue exhibition, organized by London’s National Portrait Gallery, viewers can expect to see over 40 years of work by an artist who, as UK critic Adrian Searle points out in a recent Guardian article, “gives us introspection, absorption, an unassailable and unknowable selfhood, even one we know is false.” As for Sherman’s relationship to the aforementioned sub-genre, Searle has this to say: “She cuts through the smug self-conscious vanities of the selfie to show us bleak and desperate insecurities.”
vanartgallery.bc.ca