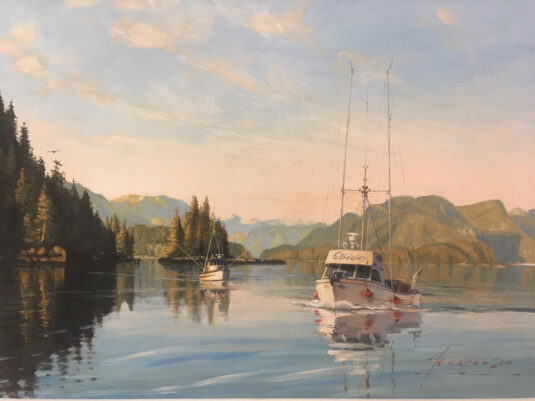 PETLEY JONES GALLERY, Vancouver BC - Nov 8 - 22
by Michael Turner
Now in his 85th year, John M. Horton, FCA, CSMA, continues to produce “technically accurate” paintings of seagoing marine vessels both historic and contemporary. For his current exhibition, Horton displays 15 new works that represent his ongoing “exploration of light, texture and colours of the sky, clouds and sea.”
Considered among the finest marine artists of his generation, the British-born Horton spent a portion of his childhood not at sea but at the helm of his bed, convalescing from a “catastrophic accident.” While his peers played outdoors, Horton was steered toward drawing and painting, for which he showed an aptitude.
At 16 he attended the Poole & Bournemouth Schools of Art, while on weekends he was a volunteer reservist aboard HMS Wessex, an experience that led him into the Royal Navy. Following military service (he was stationed in the Pacific), Horton worked as a designer and architectural artist at the legendary shop fi tters Frederick Sage & Co. of London, where he was mentored by the fi rm’s chief designer, Vic Barber. In 1966 Horton moved his family to Vancouver and opened an architectural rendering practice in the Marine Building.
Despite a growing business practice, Horton never stopped painting – not only contemporary West Coast marine life, but also historic works, most notably a series based on Capt. George Vancouver’s late-18th-century expedition. These panels, made under the Re:Discovery ’92 commemorative banner, were thoroughly researched, both in libraries and at sea, where Horton resailed Vancouver’s entire 1792-94 voyage from the Olympic Peninsula to Alaska.
Opening reception Nov 7, 6-9pm
petleyjones.com