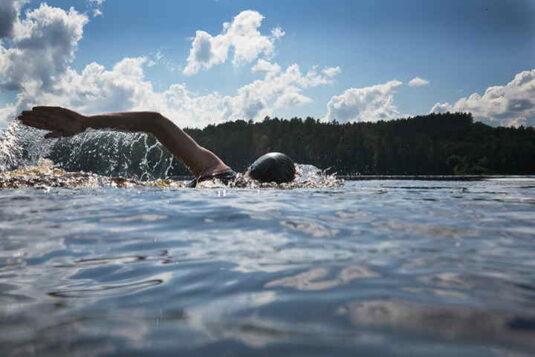 Touchstones Nelson Museum of Art and History, Nelson, BC

TOUCHSTONES NELSON: MUSEUM OF ART AND HISTORY, Nelson BC - March 7 - May 31
by Michael Turner
Ontario artist Tom Thomson was last seen alive on July 8, 1917, when he set out alone on Canoe Lake. Hours later his canoe was found fl oating empty not far from where he departed. A week after that, his body surfaced. He had drowned, and no one could explain how a master canoeist like Thomson could go down so easily. A hundred years later, artist Paul Walde marked the occasion by swimming the length of Canoe Lake.
Walde’s 3 km swim was more than a tribute to one of Canada’s best-known and much-loved painters; it was, as artists are prone to demonstrate, an attempt to understand Time and Space beyond the default categories of eyes and ears – a total sensorial exploration of landscape and history through performative experience. Accompanying Walde’s swim were a series of interconnected events: a brass band featuring a mandolin soloist performing a Walde composition; a flotilla of canoes upon which the band played; and three synchronized swimming routines staged along the route – all of which were videotaped for exhibition display.
Based in Victoria, where he is associate professor of visual arts and department chair at the University of Victoria, Walde is an award-winning artist, composer and curator with a particular interest in the “unexpected interconnections between landscape, identity and technology.” In 2013, he completed Requiem for a Glacier, a site-specific sound performance featuring a 55-person choir and orchestra live on the Farnham Glacier in the Purcell Mountains. Walde is a founding member of Audio Lodge, a Canadian sound art collective, and EMU Experimental Music Unit, a Victoria-based sound ensemble.
touchstonesnelson.ca