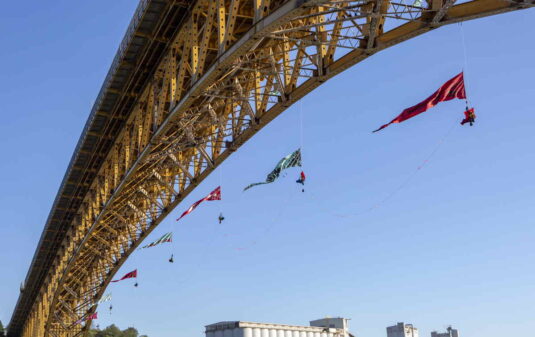 On July 3, 2018, seven people lowered themselves and seven 40-foot pennant banners from the underside of the Ironworkers Memorial Bridge. These evocative banners, like those flown from the bridges of sea-going warships, were designed by Indigenous artist activists from the Pacific Northwest. Among the seven who took part in the Greenpeace Trans Mountain pipeline protest’s aerial blockade of an outgoing oil tanker was Tsleil-Waututh grassroots leader and contributing artist Swaysən Will George.

George’s first-hand experience provided the basis for a video made in collaboration with another banner contributor, Ronnie Dean Harris. This video, along with the seven banners (six of which have been donated to the MOV, while George’s banner continues to be used for “public outreach”), form the core of an exhibition that, in the words of MOV Curator of Indigenous Collections and Engagement Sharon Fortney, demonstrates how “Indigenous activism and contemporary expressions of culture remain indistinguishable.”

In the days following the protest, the MOV approached Greenpeace about the possibility of exhibiting the banners, which were taken into police custody (as evidence) immediately following their deployment. A month later, six of the banners were made available to the museum, with the blessings of Greenpeace and the contributing artists. Although badly wrinkled after the police had stuffed them into plastic bags, the banners have responded well to numerous conservation treatments and, despite a battle-worn wrinkle or two, are available to viewers in an “up-close and personal” fashion.