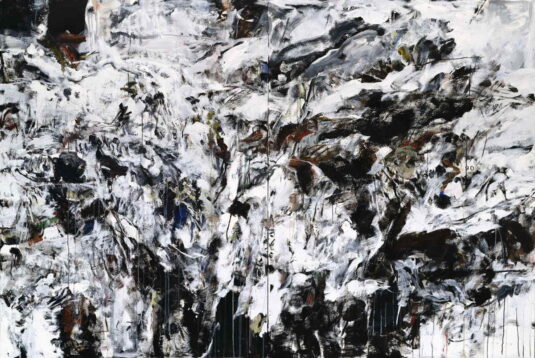 by Robin Laurence
Beloved Canadian artist, educator and philanthropist Gordon Appelbe Smith died in his West Vancouver home on January 18, 2020, one hundred years and seven months after his birth in East Brighton, England. Smith, who migrated to Canada with his family when he was a teenager, studied at the Winnipeg School of Art and settled in Vancouver in 1944. Along with colleagues such as Jack Shadbolt, Takao Tanabe and Don Jarvis, he came to prominence in the 1950s and ’60s as a leading proponent of the West Coast’s lyrical, landscape-based abstraction. During the last few decades of his career, his often brushy and expressive paintings swung between the representational and the abstract, from scenes of dense foliage, snow-laden trees or forest-girdled ponds to black-on-black works that grieved the losses of war.
Until recently, and despite declining health and difficulties walking, Smith painted every day, and a memorable late photograph depicts him working in his studio while sitting in a paint-splattered wheelchair. Much honoured with exhibitions and awards during his lifetime, he will be remembered not only as an artist of immense skill and integrity, but also as the most generous of souls, giving endlessly to friends, colleagues, charities and art institutions. He was especially supportive of young artists and art education.