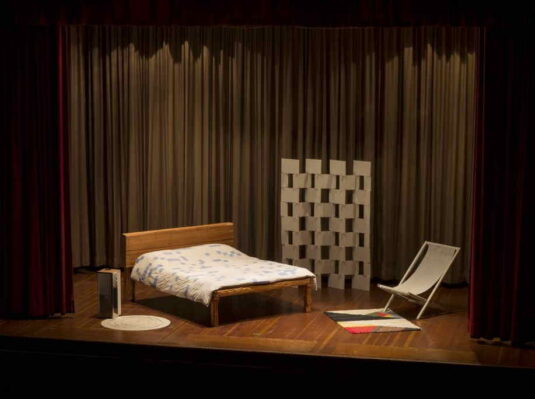 CONTEMPORARY ART GALLERY, Vancouver BC - To April 5
by Michael Turner
It is no small irony that Vancouver’s recognition as an art hub (see Phaidon’s Art Cities of the Future, 2013) came at a time when many of its artists were finding it increasingly difficult to secure studio space, let alone living space. More recently, Rodney Graham’s $4.8-million chandelier (commissioned by a private developer and installed underneath a publicly owned bridge) was seen as the ultimate artwash. How timely, then, that the CAG has mounted an exhibition that, while not in direct response to the exclusive city, can be read through its expensive lens.
Inspired by participating artist Erica Stocking’s installation of the same name, this group exhibition “investigates the patriarchal conditions inherited from modernism, particularly as they have informed assumptions about how and where ‘serious’ artwork gets produced.” Of its 10 artists, all of them in various ways provide evidence of how their work is structured by the temporal and spatial constraints of a city whose built environment has been designed, manufactured and stage-managed by men.
The Artist’s Studio is Her Bedroom marks the fi rst time in recent memory that the CAG has mounted a large group show featuring the work of younger, somewhat lesser known Canadian artists – many of whom, if not living in Vancouver, are familiar with its predicaments. In addition to Stocking’s installation, the exhibition features work in sculpture, ceramics, sound, video, drawing, performance and participatory installations by Steven Brekelmans, Justine A. Chambers, Brady Cranfield, Maura Doyle, Claire Greenshaw, Leisure (Meredith Carruthers & Susannah Wesley), Annie MacDonell and Damla Tamer.
contemporaryartgallery.ca