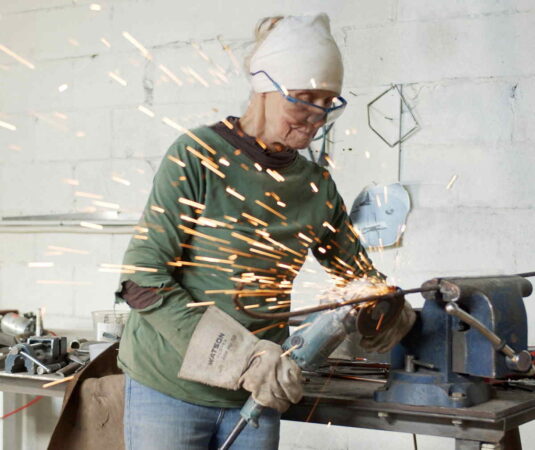 ESKER FOUNDATION, Calgary AB - To May 3
by Michael Turner
Until recently, a great artist was defined by their ability to produce resonant artworks from a temperament that both attracts and repulses. Think Pablo Picasso, Andy Warhol or Tracey Emin. But given our relational turn, with its emphasis on social responsibility and inclusion, greatness today is measured less by product and personality than it is by process and principles. Now in her seventh decade of artmaking, Calgary’s Katie Ohe fulfills these criteria and more. On display in this eponymously titled exhibition, according to the gallery, are works including “early small-scale sculptures concerned with articulations of the figure; the artist’s aesthetic break from anatomical structures into abstraction; intricately engineered large-scale kinetic forms; floorbased works concerned with the interrelationship of form, space, and movement; to a brand new series of modular sculptures designed for viewer manipulation.” Alongside these pieces are materials from Ohe’s extensive research archive, including maquettes, sketches and studies.
A major influence on sculptural practice in the region, Ohe has played a key role in Calgary’s art community as an artist, mentor, teacher, supporter and builder. Her education began at the Provincial Institute of Technology and Art (now the Alberta University of the Arts) in the mid-1950s, after which she trained in Montreal, New York City and Verona. In the early 1960s, while European landscape painting still held sway, Ohe was among the first Alberta artists to make abstract sculpture; she was noted for her inclusion of new materials, skills and techniques, including prefabricated objects and industrial processes. After more than 50 years of teaching, Ohe retired from the Alberta College of Art and Design in 2016.
eskerfoundation.com