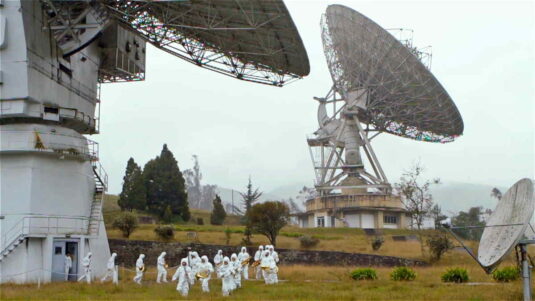 DELUGE CONTEMPORARY ART, Victoria BC - March 7 - April 4
by Christine Clark
Centro Espacial Satelital de Colombia (2015) is a video work by the Bogotá-based artist collective La Decanatura, namely Elkin Calderón Guevara and Diego Piñeros Garcia. They received an artist residency award for their video during the 20th Contemporary Art Festival Sesc_Videobrasil in 2018. Todd Eacrett of Deluge Contemporary Art explained that the gallery “will present the work primarily as a video looping installation … a large, immersive projection with full sound system to complement the musical nature of the work.”
The video has been described as a requiem for the Space Communications Centre of Colombia, two towering, space-age antennas built in the early ’70s near the town of Chocontá, in Almeidas Province. Once vital to the communication needs of the people, providing TV, telephone and radio reception, these formerly high-tech antennas have fallen gently into a state of disrepair.
Centro Espacial Satelital de Colombia shows the antennas standing in farmers’ fi elds. We see a cow and her calf, tangled shrubs, hear birdsong and thunder. In the rain and mist, we also see the Chocontá Symphonic Youth Band. The youth are fresh-faced and dressed in white hooded space suits. They play a composition in tribute and farewell to the antennas.
In a Videobrasil interview, Elkin Calderón Guevara said: “We have this thing that is basically dead, and we need something alive. This is how we mix the kids with the antennas, the technology with the music, the obsolete with the new.”
deluge.ca