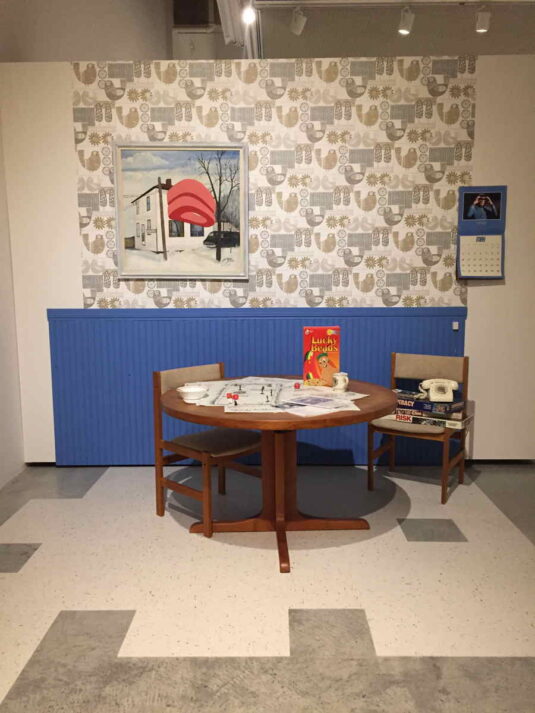 ILLINGWORTH KERR GALLERY, Calgary AB - To March 7
by Michael Turner
Taking its cue from the 2011 Ernest Cline novel Ready Player One and Steven Spielberg’s 2018 film adaptation, Ready Player 2 is both an exploration and a critique of North American popular culture’s post-war obsession with science fiction, comic books and, more recently, video games. Yet unlike earlier critiques of the escapist and indeed addictive aspects of these cultural forms, here artists Sonny Assu and Brendan Tang focus on how these forms “alternately reinforce and transcend racial boundaries in youth culture.”
Curated by Laura Schneider and organized and circulated by the Reach Gallery Museum Abbotsford, Ready Player 2 comprises found objects, past works and site-specific collaborative pieces by two mixed-race artists who grew up in the 1980s and 1990s: Assu, who is Ligwilda’xw Kwakwaka’wakw, was born in North Delta, BC, and now lives in Campbell River, and Tang, whose Trinidadian parents are of Chinese and South Asian descent, was born in Dublin, Ireland, and is a resident of Vancouver.
Those familiar with the work of Assu and Tang will see evidence of their signature interventions into existing objects and images – from Assu’s tertiary-coloured UFO-like ovoids floating over Euro-Western landscapes to Tang’s initially inexplicable ceramic add-on appendages. But it is the artists’ immersive installations that provide the contextual ground for these works. For some, the wood-panelled basement, the arcade and the comic book store, like the gallery’s ostensibly neutral white cube, will be “seen” as a given. However, for those sensitive to the unexamined trappings of white monoculture, these “adolescent sanctuaries” will be met with chills.
Panel discussion Feb 25, 12-1:30pm
ikg.acad.ca