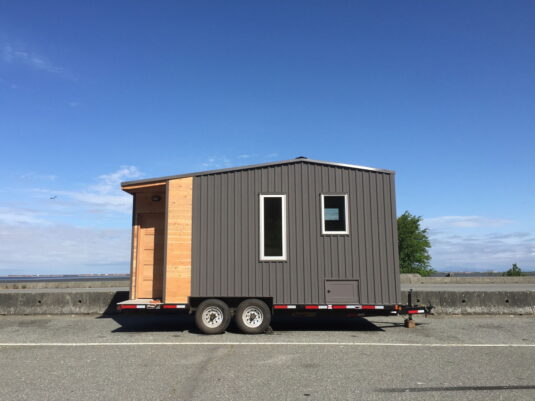 EVERGREEN CULTURAL CENTRE, COQUITLAM BC - Sep 15 - Nov 4, 2018
By Michael Turner
The 2018 appointment of Germaine Koh to the position of artist-in-residence for the City of Vancouver’s Engineering Department came as no surprise to those familiar with her work. Though known for participating in a variety of media, Koh has over her 25-year career managed to occupy that most challenging of artistic battlegrounds: the social-formal divide. Thus, when it comes to serving the public artistically, particularly on an issue as irreducible as housing, Koh is a wise choice.
For Home Made Home, Koh began with a question: At a time when owning a house is unlikely, what other forms of housing can you imagine? From there she set out on a research project that led her to the small house movement, where she immersed herself in basic carpentry and ergonomic design. The result, not surprisingly, was her own small house, which she keeps on Salt Spring Island. However, for exhibition purposes, Koh displays components – works that allude as much to minimal sculpture as they function as kitchens and bathrooms.
“A lot of my work tries to set up situations that cause us to refl ect upon the world at large, and how things are organized, the systems that are out there,” says Koh in a 2016 Kelowna Art Gallery interview. “But I am hoping this project goes a step further and people start asking why do dwellings have to have a minimum size, what’s preventing people from living in very small houses? So this project is about trying to propose some of those other models for living arrangements.”
evergreenculturalcentre.ca