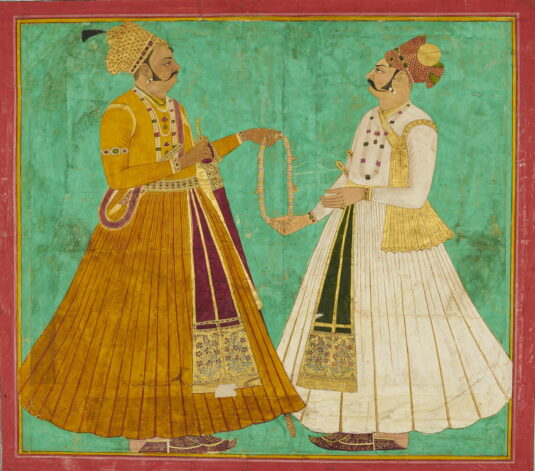 SEATTLE ART MUSEUM, SEATTLE WA - Oct 18, 2018 - Jan 21, 2019
By Matthew Kangas
Known in the West as riding pants that balloon above the knee, “jodhpurs” were the result of a maharajah’s clothing trunk sinking en route to Queen Victoria’s jubilee. Savile Row recreated his court wardrobe and the look caught on with aristocratic equestrians.
Assembled by a world-class team of scholars and curators at Jodhpur’s Mehrangarh Museum and the Museum of Fine Arts, Houston, the lavish exhibition Peacock in the Desert involves only twoother lenders: HRH Queen Elizabeth II and the ruling family of Kuwait, Al Sabah. Never before has such over-the-top bling been seen asserious social history, in a spectacularly designed setting. Court paintings illustrate the actual clothes and deluxe trinkets on view; it’s not a trip to India, but such authenticity comes close.
After being in Houston and before traveling to the Royal Ontario Museum in Toronto,this major museum survey of the aristocratic arts of the Marwar-Jodhpur areaof Northwest India (a.k.aRajasthan) fi lls the Seattle Art Museum with hundreds of precious objects. They range from diamond-and-emerald necklaces to massive silken tents and elephant saddles as well as rifl es, cannons, pistols, ruby-encrusted swords and axes. At the show’s only West Coast venue, visitors will marvel at the spectacular achievements of the Rathore dynasties in the fifteenth-century capital, Jodhpur, right up to the twentieth century. Even in jewelry, the dictum about Indian history—the local is the global—holds true: by the 1920s, platinumwas imported from Europe, while the taste for emeralds traveled from India to Paris and London.
seattleartmuseum.org